The revised 1,700-unit proposal includes changes to the project’s park and lakefront connection

A revised plan to build three new residential towers rising as high as 80 stories was introduced to Lakeshore East residents at a meeting Wednesday night. The latest proposal from Lendlease Development and Magellan Development Group aims to address lingering concerns that prompted 42nd Ward Alderman Brendan Reilly to block an earlier version of the ambitious multi-building plan in December.

Beyond swapping 300 hotel rooms for residences and minor facade tweaks, little has changed regarding the three towers themselves compared to last summer’s original presentation. Designed by Chicago’s bKL Architecture, the glassy trio slated for Lakeshore East’s parcels I, J, and K/L will still climb to respective heights of 80, 50, and 40 stories and will now feature a combined 1,700 residential units.

Instead, the majority of the recent revisions focused mainly on the 134,000 square feet of green space below the towers and a proposed pedestrian link between Lakeshore East and the Chicago Lakefront Trail.

While the original plan saw a portion of the sloping park dominated by a large staircase and a tight zigzagging ramp, the updated design opts for smaller ramps and more active use of the available green space. The solution, from landscape architect Claude Cormier + Associés, sets aside three “outdoor living rooms” that can be used for activities such as picnics, sunbathing, or playing catch.

Big changes were made to the east end of the site, where the elevated park drops to meet a ground-level bike and pedestrian passage before crossing under Lake Shore Drive. Here, the revised plan calls for new video cameras, fencing, upgraded lighting, and a single controlled access point managed by a manned security post.

Other tweaks include moving the Parcel J building 15 feet to the north to better separate it from existing residential buildings and a realigned traffic plan to minimize curb cuts and vehicular congestion along Upper Harbor Drive. The development still includes new retail space and concealed parking for up to 1,250 cars. 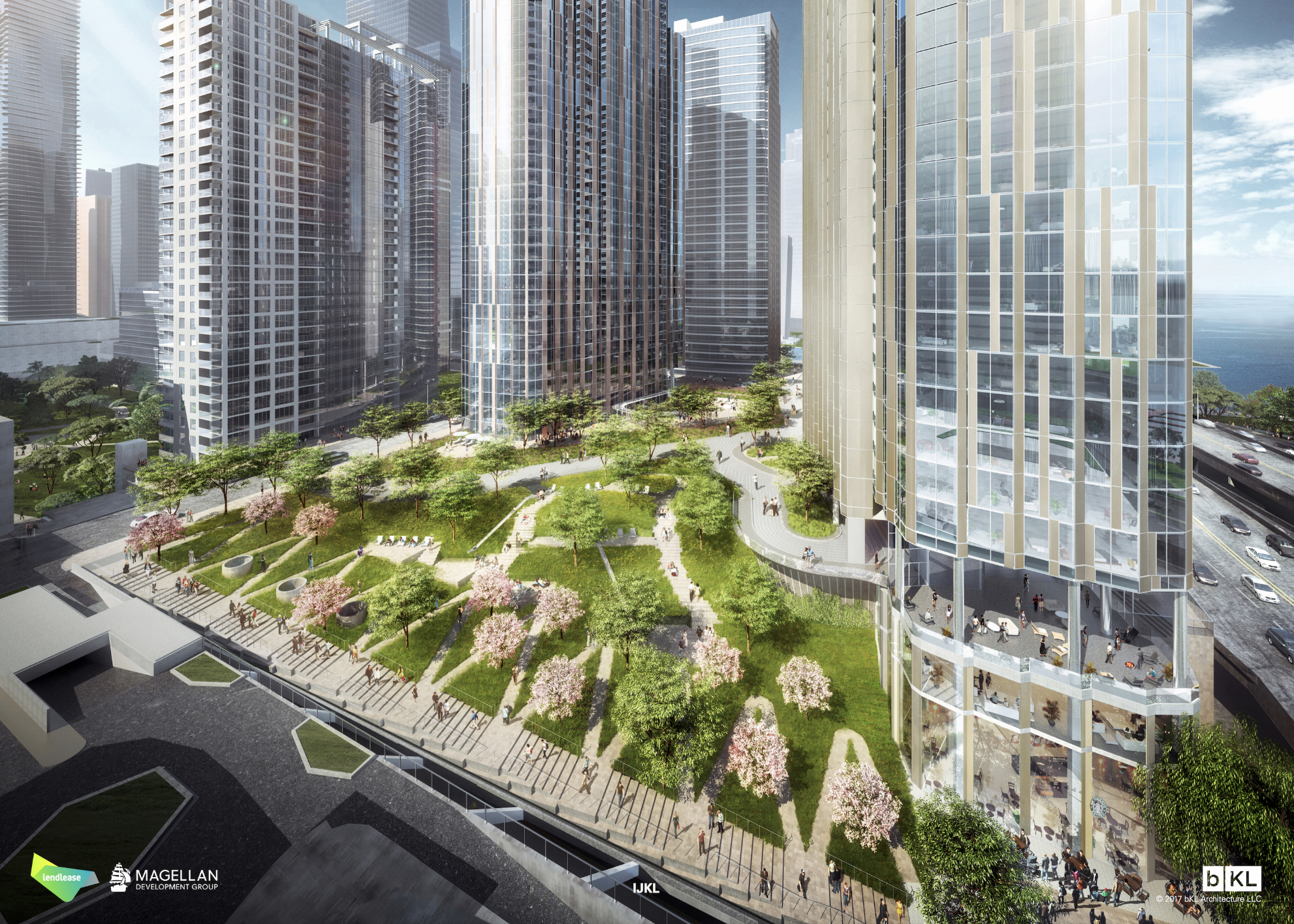 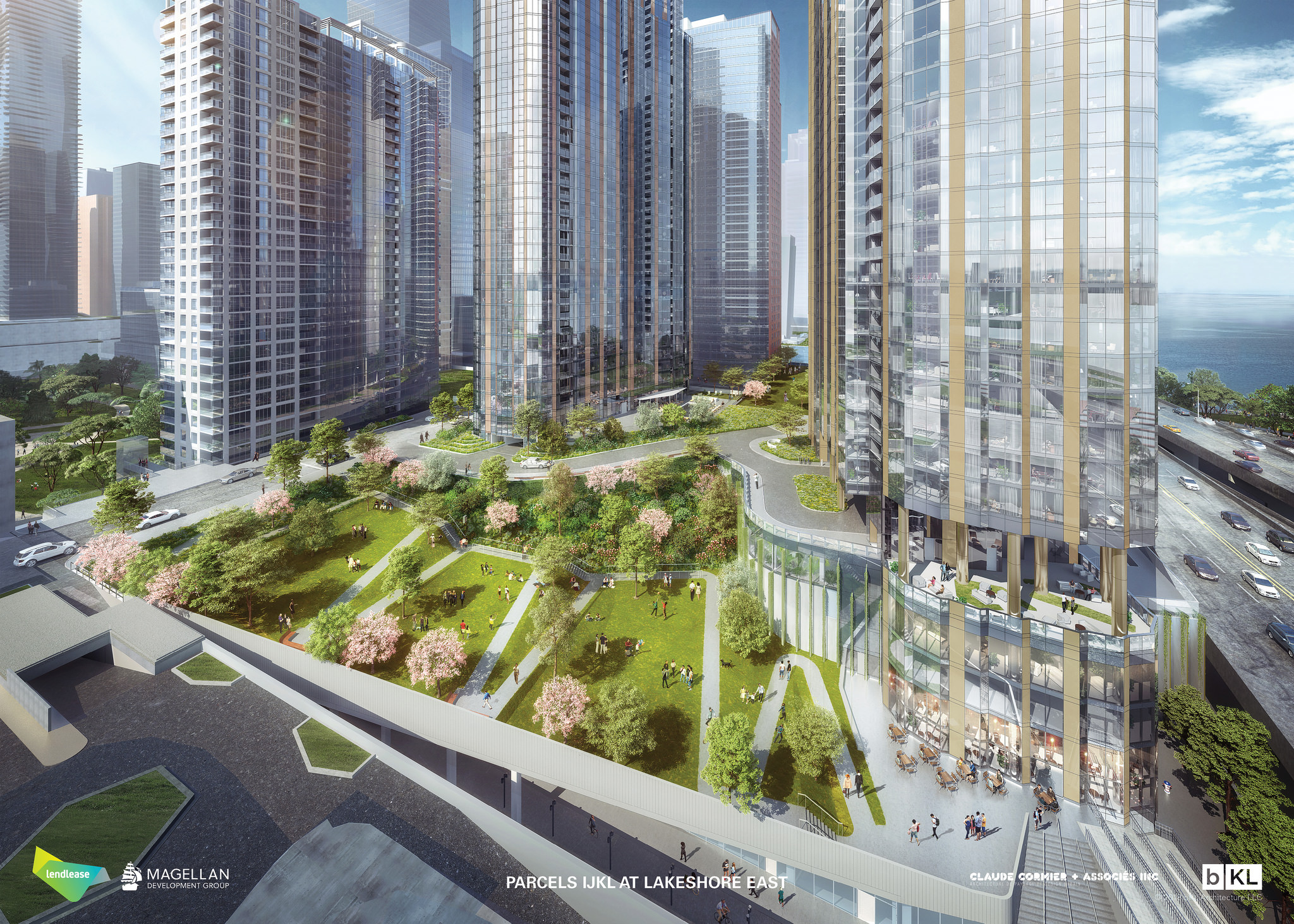 The large staircase and zigzag path (left) have been swapped for more active open space in the form of three “outdoor living rooms” (right).
bKL Architecture

“This is a pivotal site that we believe completes a symbolic gateway to the downtown core,” said bKL boss Thomas Kerwin at Wednesday night’s meeting. “But, perhaps more importantly, it adds vibrancy, open space, and connectivity between the waterfront and the community.”

Although Alderman Brendan Reilly reaffirmed his prior opinion that the original plan “needed a lot of work,” the city official admitted that he thought the revised design represented a dramatically improved proposal. “Our work is not done here and I’m prepared to sit back down at the negotiating table, if needed, based on the feedback I hear from residents,” Reilly said, stressing that it is not a done deal.

The three-tower plan for parcels I, J, and K/L will need to amend the zoning of the 2001 Lakeshore East master plan to build taller than what is currently permitted on site. The existing zoning calls for four buildings (hence the four parcel letters) with an even greater density of 2,100 units. 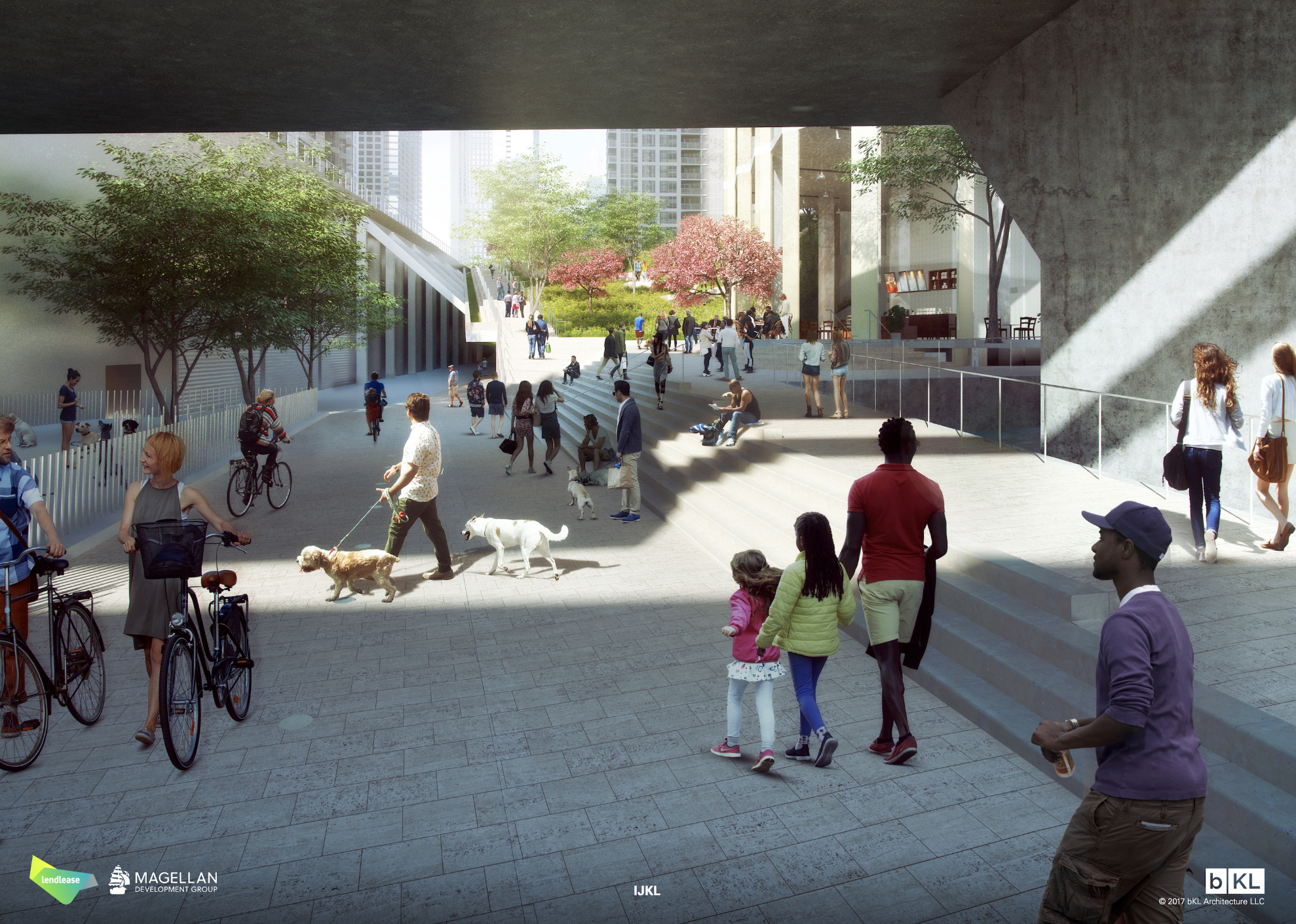 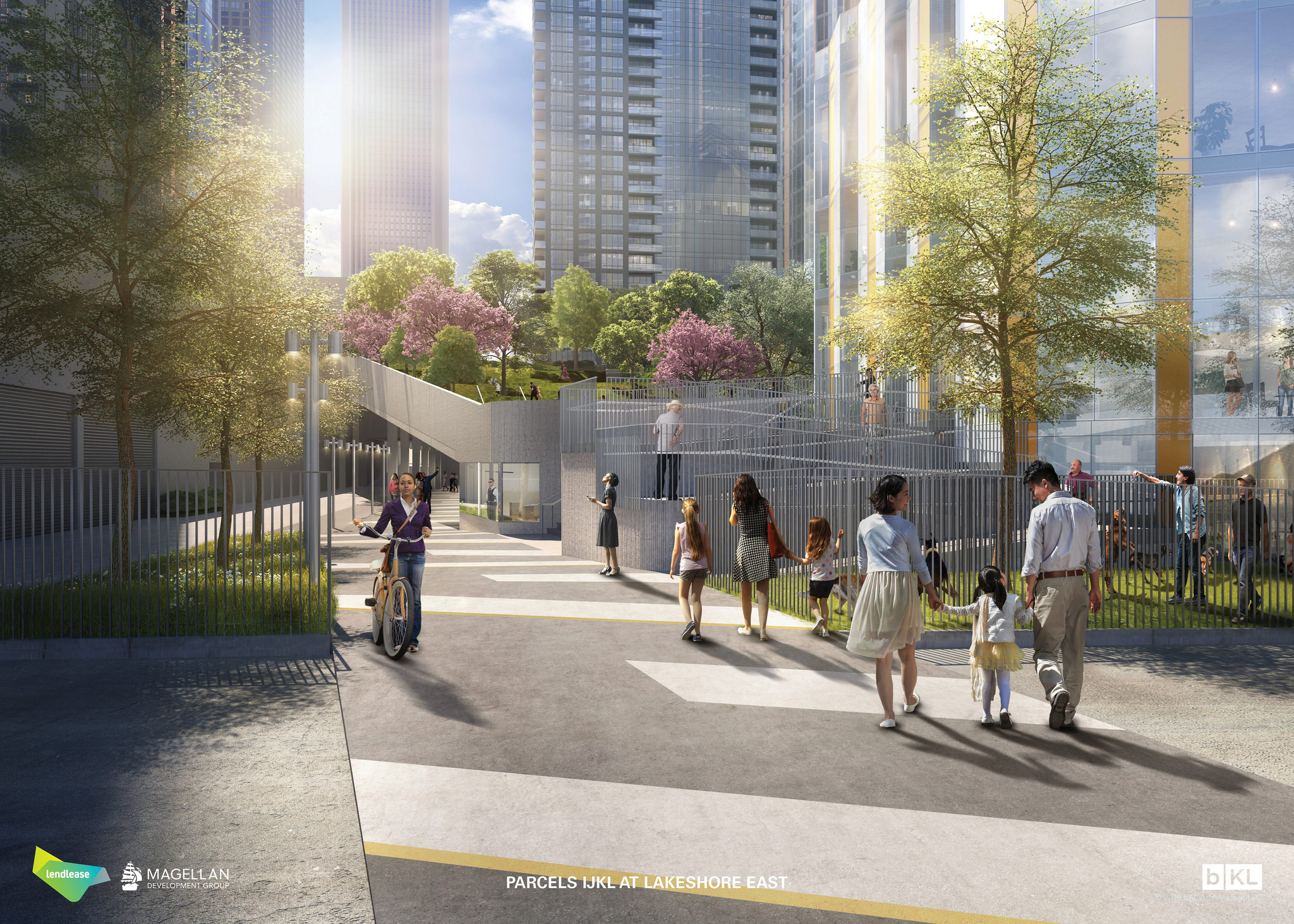 If its plan is approved, the team hopes to begin work on the shorter rental building at Parcel K/L and the condo building at Parcel J. Phase two moves onto the eye-catching 80-story condo tower at Parcel I. The developers expect total construction to take between five and seven years.

Though unveiled alongside the I, J, and K/L buildings last summer, a fourth new building, at Lakeshore East’s Parcel O, is not included in the the plan. That combination hotel and apartment proposal is already in compliance with the zoning in the master plan for Lakeshore East. Tower O will, however, need to go before the Chicago Plan Commission for a Lakefront Protection Ordinance review prior to breaking ground.