A celebration of all things small—from towns and tiny houses to micro apartments and modular furniture.

Tiny houses are having a moment right now, but what would they look like in Chicago? Can they serve a purpose in the big city? Who would they serve? These are questions that architects Lon Stousland, Marty Sandberg, and Terry Howell had to ask themselves when designing their entry for AIA Chicago's Tiny Homes Competition. The trio looked to other types of housing styles typically found in Chicago—primarily the courtyard building—when drafting their ideas. The design worked, and the trio's idea of building a tiny house community around a courtyard won them the contest.

When we think about tiny houses, we may think about the cute, almost cottage-like structures that we see on design blogs and TV. However, in order for them to work in Chicago, we have to look towards existing building types and try to create a tiny house development that would not only match the city's density, but one that would feel familiar to city residents. At least this was the thinking of architects Lon Stousland, Marty Sandberg, and Terry Howell, whose entry won AIA Chicago's Tiny Homes Contest earlier this year. The contest asked architects to come up with a design that would serve homeless youth. According to numbers from the City of Chicago, at least one third of the city's unsheltered homeless population are people between the ages of 18 to 24 years old. And even when Chicago's young homeless do find shelter, many times there are issues with security and privacy. So how can we use tiny homes as a way to serve Chicago's homeless youth? We linked up with Lon, Marty, and Terry to discuss this issue and their winning proposal.

For those interested in taking a look at the house in person, the Resurrection Project is currently displaying it at 4631 S. Marshfield Avenue.

What does a tiny house in Chicago look like?

Lon: It’s tough because tiny houses can’t be built for a number of reasons. But as far as size goes, I think it’s safe to assume that it’d be similar to a studio apartment—say anywhere in the range of 350 square feet up to 550 square feet.

Marty: Right now there really is no tiny home in Chicago, partially because of the economic reality behind it—our zoning laws say one building on one lot. So, if you’re going to spend a quarter million dollars on a lot, then it immediately takes out any possibility that people are going to want to build small.

So did you guys not have a point of reference when designing a tiny house specifically for Chicago?

Marty: As far as Chicago goes, the closest thing you’re going to find are the micro apartments that have been built just in the last two or three years. Planning wise, our concept is put together in a townhome arrangement. So the layout is similar to a micro apartment building you’d see in Chicago or New York, but we’re just taking it down to one floor and going horizontal instead of stacking them as high as you can.

You hinted at the zoning issues, but what’s the current framework around allowing these types of residences in Chicago?

Lon: Right now it’s not allowed, mainly because of the one building per lot clauses in the zoning code. But the design competition that was held by AIA Chicago was done to help promote the Tiny Home Summit that was up at UIC earlier this year, and the goal of that conference was to get the conversation started about what it would take to start thinking about tiny homes in Chicago and the benefits that those tiny homes could provide. So the competition that we participated in was specifically thinking about a solution to homeless youth and homeless students that attend the schools in the city.

When we look at the aerial map in your proposal, we can see a lot of vacant land in this area. As far as you guys know, are there any proposed ordinances that would allow multiple tiny homes on a single property?

Marty: Right now there isn’t anything specifically geared towards tiny homes. When the zoning ordinance was written, these things didn’t exist and was never really a thought. The AIA Chicago contest actually made a point of explaining Chicago’s townhouse ordinance to out-of-town architects on where to start—for example, the most likely way to work within the existing framework is to look at the setbacks, the density requirements, and so forth.

You’re still going to run into some issues with the minimum 500-square-foot dwelling unit average. But when you look at new micro apartment developments, they have apartments that are only 300 square feet, which they can do because they’re balanced out by having larger units. So in the case of a tiny house development, that’s something you may have to do to make it work. You may end up with a couple of double units that are 700 square feet and let everything else be 300 to 400 square feet.

The zoning and building codes don’t quite line up, but they’re not far from making tiny houses a reality for Chicago.

When we look at tiny houses as a solution to youth homelessness, why would anyone want to live in one of these homes versus say a micro apartment in a larger building?

Terry: I think it doesn’t have to just be homeless youth. There’s an endless list of people who could use housing like this—and really frankly, it could be tailored to any use.

Marty: And as far as living in a standalone house versus a high-rise, I think it comes down to personal preference. Personally, I’d always rather live in a walkup building where there’s more community, where you have neighbors, and maybe even a little bit of outdoor space. You feel like you’re a part of the neighborhood. 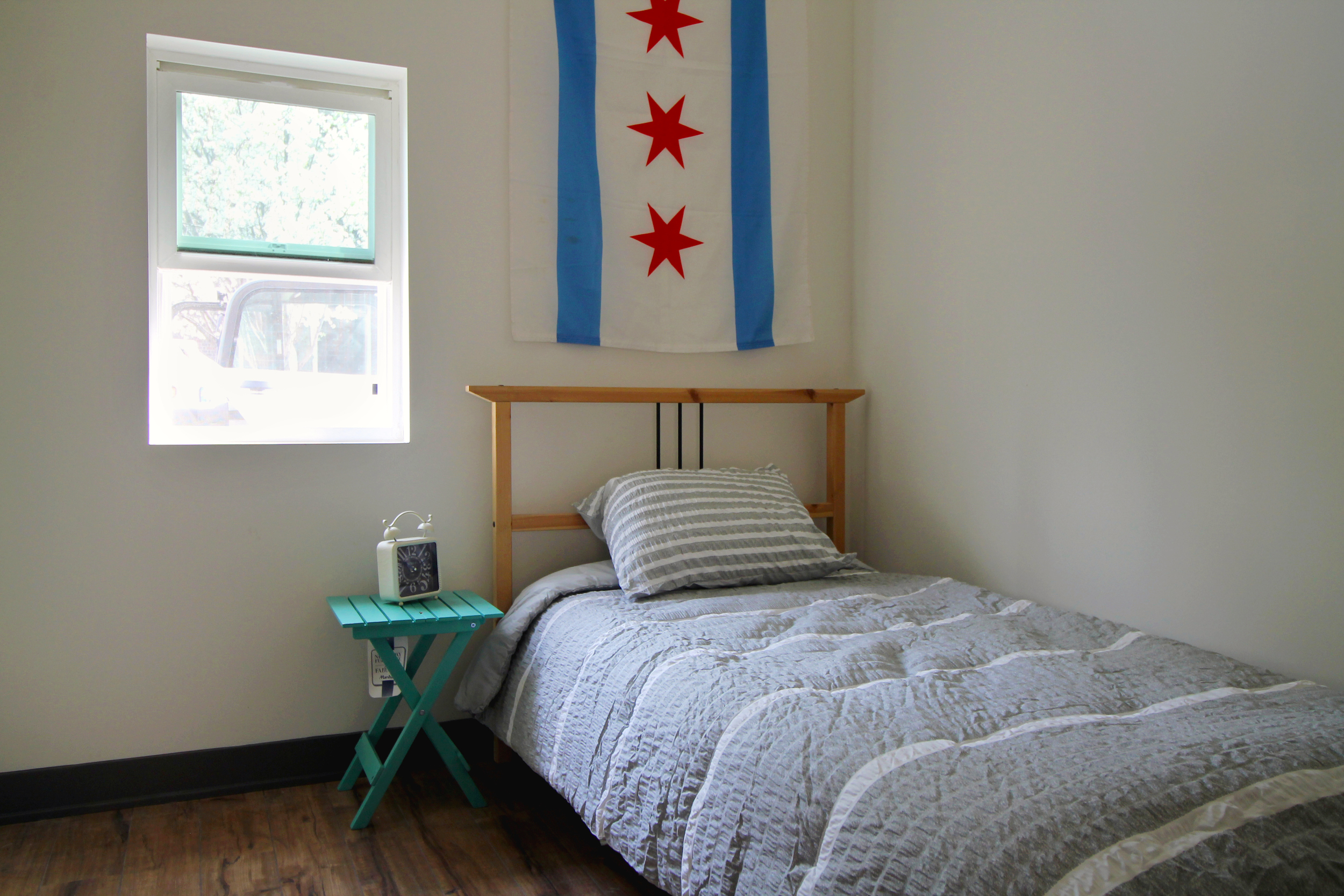 When we talk about the Lathrop Homes public housing development, some will say that it was a successful one because it does bring people to the ground level, there’s green space, and there’s a sense of community there. So, perhaps, this type of plan that you’ve developed tries to follow some of the same guidelines?

Terry: I think if we look at it socially, yeah, we’re getting away from those large monolithic towers, because we know what those bring. This way of planning is more similar to its surroundings, so there’s already going to be a sense of familiarity, and a lot more sense of community. The design that we put together for the competition is focused on community—for example, there’s a center courtyard in our plan. If we talk about people who are in need, say like seniors, or veterans, having this type of plan not only puts people together who have similar needs, but it’s going to help foster community among them.

What are some of the disadvantages to a tiny house development like this?

Lon: At least in the way we think about it, when we talk about a Chicago tiny home, it’s going to be a little bit different than the ones that we see often in the tiny house fad—you know where they look like little cottages and are placed off on their own. We’re here in Chicago, and we’re still building in a dense city, so we’re trying to create a housing type that fits in with the neighborhood. As Marty mentioned earlier, we’re using that townhome model, so we’re developing something with a building typology that we’re already familiar with. We’re not trying to totally reinvent the Chicago housing model, but we’re using a building language that we may be a little more used to in Chicago.

Right, because when we look at the elevations of your proposal, it almost looks like the same floor plan that you might see in other buildings here.

Marty: You look at the courtyard buildings in Uptown and all up and down the lakefront, we’ve been building them for 100 years and our model is the exact same footprint. It’s proven that it works. It’s just a downsized version of these building types that Chicago has already been using for 100 years.

And this is something that we talked about a lot during and after the conference, that tiny homes are still a new idea for Chicago. If you want to start making progress on building tiny homes here, it can’t be something entirely foreign. It can’t be a bunch of stainless steel, spaceship-looking eggs. So, building something that’s familiar, with materials like brick, wood, and concrete, it makes it more palatable on the social end for the neighbors who want something that looks like it belongs, and also on the economic end for the developers who want to make a profit from building them.

Lon: What was interesting with this competition is that they capped us at 350-square-feet, and said that that was the biggest your tiny house could be. Our model was 330-square-feet, and that was one of the biggest ones. People took it as a challenge to design something as small as they could rather than simply think about what makes for a functional tiny home in Chicago.

Marty: It was probably the biggest criticism we received. People were saying that we made ours too big. Just because you can go smaller doesn’t always mean that you should. At some point it just gets inhumane to cram people into 175 square feet.

One thing I’ve always been a little curious about, and maybe a bit skeptical about is, why tiny houses right now? We’ve always had trailer homes and little cabins that people live in all year round, but right now it’s tiny houses. But maybe when we think about them in terms of providing a service or a social need, maybe we can say that everyone deserves to have good design. And maybe people can feel good about themselves and their homes, because while they’re inexpensive, they’re still nice houses.

Terry: Some people may think that good design only means that something is going to be expensive. But to get anything to work at any kind of price point, and to get it to work well for whatever use you have, it inherently needs to be a good design. Not to say that what we have is the very best design possible, but because of some of the decisions we’ve made, aesthetically it works, it’s compact, but also the materials are simple, and the ability to construct it is simple—everything about it is efficient, and that’s because it starts with actually having a good design.

If you’re trying to serve a need, some people may immediately think that that housing has to be lower cost and lower quality of design. They’ll want to keep it simple because it’s easier and cheaper. But it’s possible to still keep something simple and cheap and put a lot of thought into it and do it well so that it not only serves its purpose, but has some longevity.

Tiny house financing: What you need to know

View all stories in Micro Week