How to make micro living in Chicago work

Living in a micro apartment is not for everyone, but for some, it can turn out to be a great living arrangement. There are certainly some challenges to living small, but on the other hand, there can be many benefits. During our first Micro Week from last year, we heard from a reader who came to love living in a 300-square-foot Gold Coast apartment, and coincidentally enough, for this year’s Micro Week, we share the story of yet another Gold Coast resident who has learned to live comfortably in a small space. Curbed reader Caryn Jendro found her way into the world of micro living a few years ago when her then-roommate decided to shack up with a boyfriend. Here’s her story.

A celebration of all things small—from towns and tiny houses to micro apartments and modular furniture.

For me, the worst part of background checks is when they ask for multiple years of prior addresses, because I have had many, many addresses. I've jumped back and forth from living with a roommate to living on my own, and began the cycle again when I moved back to Chicago in 2012. After living a year in a giant Wrigleyville apartment with my childhood best friend, I was back to looking for a place on my own when she found her dream man. So, I was determined to find my dream apartment.

I had a difficult feat ahead of me to find such an apartment. I needed it to have charm, a downtown location close to the Red Line, and be large enough to fit my stuff, but also small enough that I could afford it. Oh, and a good laundry set up—always.

Some might be surprised by this, but I was actually excited by the idea of living in a studio. Even at age 26. I liked the idea of having a large cozy room, where I could see everything I've collected in one place. The idea seemed comforting. And I knew immediately when I toured my studio that it was the one.

I loved that there was an entryway to pass through, large windows, a separate room for the kitchen, hardwood floors, and crown molding. Above all else, the closet was 6 1/2’ by 5 1/2’ and had built in shelves. My reaction upon seeing it was "Where do I sign?"

My challenge was fitting all my furniture meant for a one bedroom apartment to fit into the studio. Before my move date I drew out an elaborate blueprint, detailed down to the inch to make sure everything would fit, and that I wouldstill have room to walk. I sold off a few pieces of furniture, and replaced my couch for something slimmer to conserve space further. I was terrified when I first walked into the emptied apartment. Surely I had miscalculated. This room was small. How would I live in a room that was 18 1/2’ x 13’? But my logistics held up, and everything ended up fitting in seamlessly. 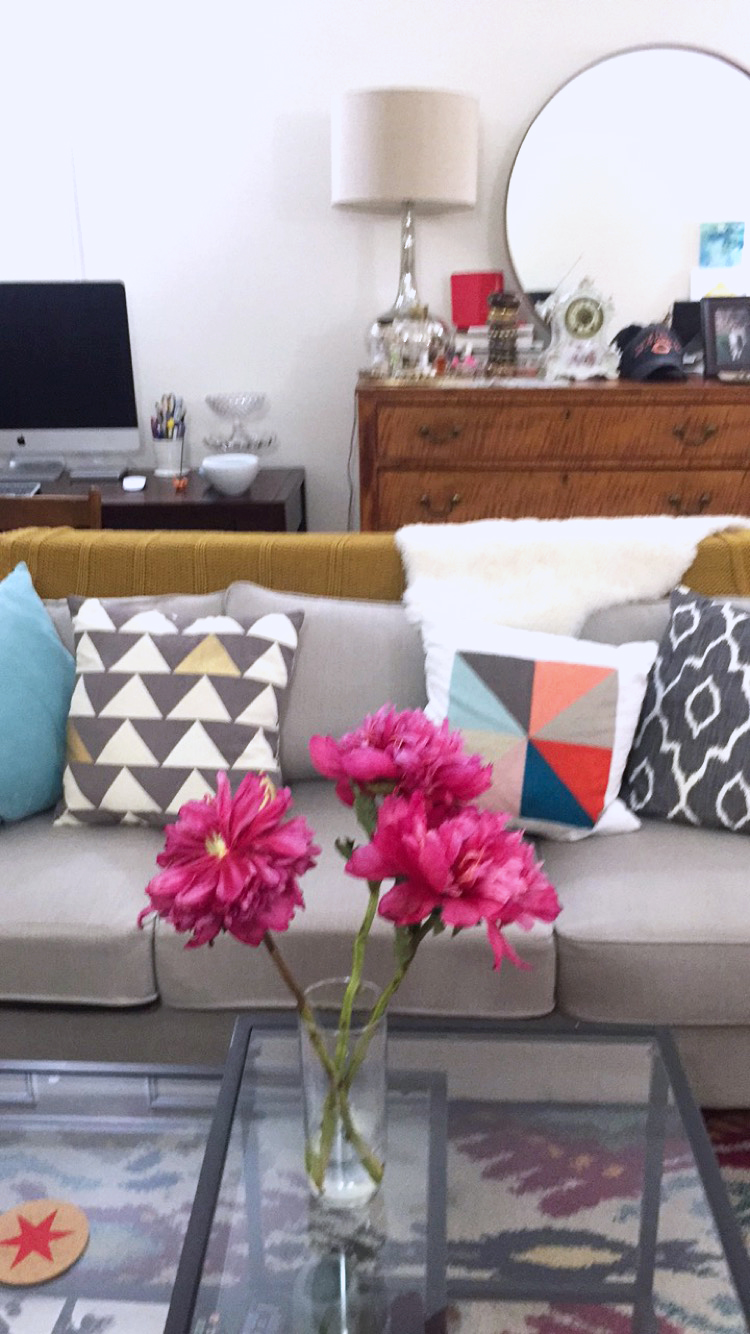 I own a mix of new pieces, midcentury modern and antiques that are well over 200 years old. I was worried that they all wouldn't quite flow being packed in so close together. I was able to solve this problem by keeping a color palette consistent throughout the space and used a pop of cool bright blue throughout. I also used three coordinating lamps to build consistency further. I replaced my coffee table with one that was simple iron and glass to keep it slightly more visually open. I got creative with storage solutions by turning the back of my closet door into a jewelry display by using simple stick-on hooks.

I became very good at furniture Tetris, since I did keep so many large pieces for the studio. Whenever I wanted to do yoga or have an open space to paint I had to shuffle the furniture around, but I was able to make it work.

To keep the apartment as homey as possible, I put up curtains immediately and bought myself fresh flowers whenever my budget would allow. I filled my walls with art, and I bought plants and tried to keep them alive as long as possible.

I used the mirror trick to make the space seem larger. I tried my damnedest to keep it tidy, because a small mess is a large mess in a studio. Every few months I treated myself to having a professional deep clean it for me. I kept my little dining table staged, although I usually just ate mostly off my couch. I even found a way to host a group of seven women over for book club comfortably.

I disliked that although I had a coat closet and a hall tree, people constantly plopped their belongings on my bed. It's difficult to preserve your bed as a zone only for sleeping in a studio, especially when you walk right into it.

I ended up living in my studio for two and a half years, which is actually the longest I lived in any one apartment. It was the first time I broke the two year threshold. I'm so glad for my time in that space. I've recently moved to a one-bedroom in the same building on Sept 1st.

Tiny house financing: What you need to know