An architect-in-training makes it work in her tiny space

After graduating from college, Janice Jones found herself needing to move to Chicago quickly for a job. With no time to tour apartments and without familiarity of the city, she ended up unwittingly becoming a part of the micro-living trend.

The Virginia native was planning to move by herself to a city where she didn’t really know anyone—or in her words, "Have the experience of having nobody to help or blame the messes on." She found a property manager online who lead her to what was described as a 325-square-foot studio in a renovated hotel in Wrigleyville. 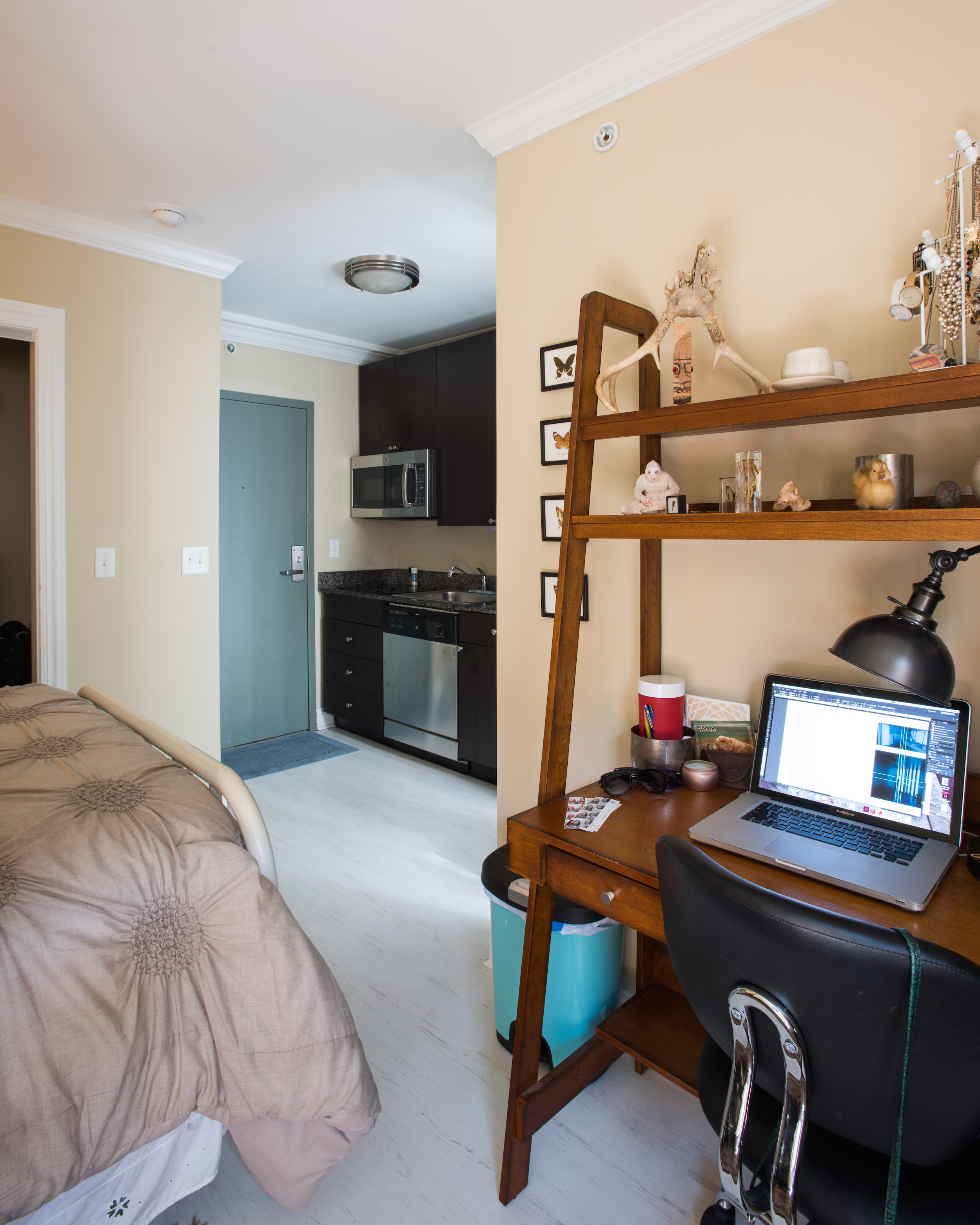 Jones, who has a degree in architecture and is working as an associate with a firm in the West Loop as she prepares to take her registration exam, used her architecture brain to plan out the tiny space before she got there—though it turns out it was even tinier than she initially thought.

Previously Jones lived in a "giant" three-bedroom townhouse—her bedroom there was bigger than her current apartment—in Richmond, Virginia, where she was attending college. But being a recent graduate she didn’t have much aside from bedroom furniture, so she didn’t have to downsize too drastically.

The Lakeview space is a standard studio apartment with a small kitchen furnished with a dishwasher and combination microwave/oven, a nice sized bathroom, and the main room that functions as a bedroom, living area, and workspace. Janice has a large gold room divider in a leaf-like design that is between her bed and the area where a small couch, desk and TV are.

She found the divider for $60 in Richmond and painted it gold, later discovering that it likely originates from the 1930s. A stylish trunk from her grandfather doubles as storage for blankets and winter clothes and as a stand for her TV and cable box. 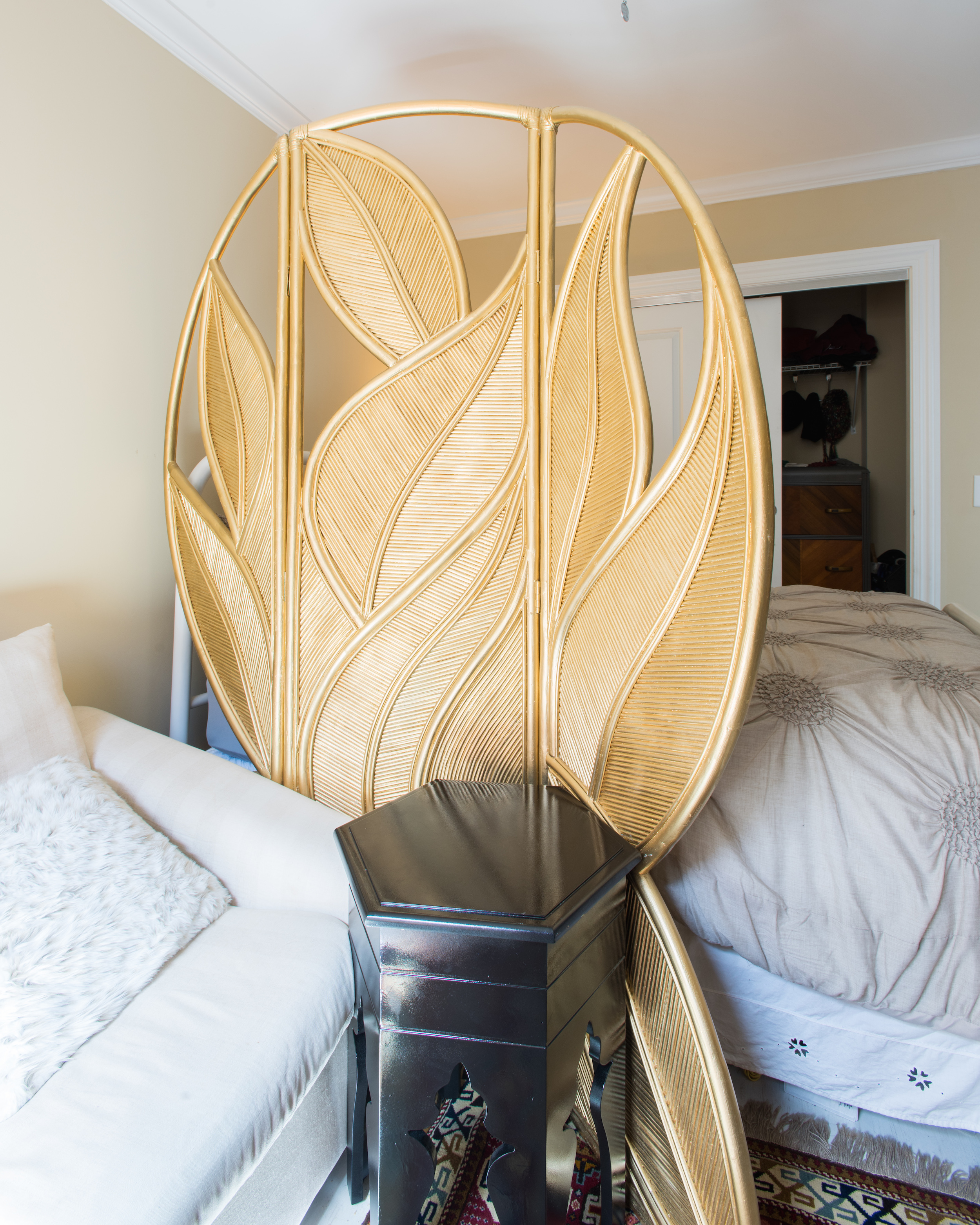 Aside from the room divider, Jones didn’t want to buy any furniture specifically for tiny spaces, instead opting to use what she has or find versatile items.

"If you buy pieces of furniture with a lifespan, there isn’t any point," she says.

She doesn’t have room for much else in the apartment, but that’s helped her be smarter about purchases.

"I think it’s more about not buying stuff. When you’re at the street festival during the summer and are like, "I want this, I want this, give me all of the little sculptures" … I think it’s helping me learn to adult and not just spend money willy-nilly," she says.

In the kitchen, she’s had to adjust to her cooking area’s proximity to the rest of the space ("It does get a bit steamy") and with using the combination microwave/oven mounted among the cabinets, which she says she likes.

One benefit with having a small space is that smaller square-footage means less space to keep cool in the summer.

"I hardly use the air conditioning because you just need to leave it on for 10 minutes. My electricity bill is like $20 a month–it’s great," she says. "I’m hardly here; I spent a lot of time outside exploring, with friends. I don’t have to waste money pumping out cold air all the time."

She was even able to have friends stay over; there’s just enough space between the kitchen and her bed for a twin air mattress.

"There were three of us in this 300 square feet. It gets a little bit of a dance, but once you learn the tango it’s fine," she says.

It gets a little bit of a dance, but once you learn the tango it’s fine.

She does worry as she approaches her first Chicago winter about being cooped up in her apartment; the nice weather and wanting to explore her new city keeps her from going "stir-crazy" inside the small space. But so far, the transition to tiny has been a mostly happy, albeit, unexpected adjustment.

"I wouldn’t be opposed to living somewhere tiny again. I love living alone; when I come back to the apartment, it’s the way I left it. I think it was an adjustment at first, but I don’t see a lot of negatives to living this way. A lot of people complain about not having enough space, but I have everything I need," she says. "Maybe I can’t have a dance party here, but the street is right outside."