While many are moving into Chicago’s rapidly developing West Loop neighborhood, long-time residents Chad and Kristen saw the boom as a chance to trade in their old loft and buy the single-family home that they had always wanted.

With four bedrooms and a detached two-car garage, this new construction home in Bronzeville has provided the couple with room for a home library, basement saloon, and most importantly, space to display Chad’s growing collection of human skulls. We met with the couple to discuss their new home and what makes it so special to them.

Chad, who works at a small graphic design firm in the West Loop, and wife Kristen, who works in risk management, and their 8.5-year-old bulldog, Reggie. 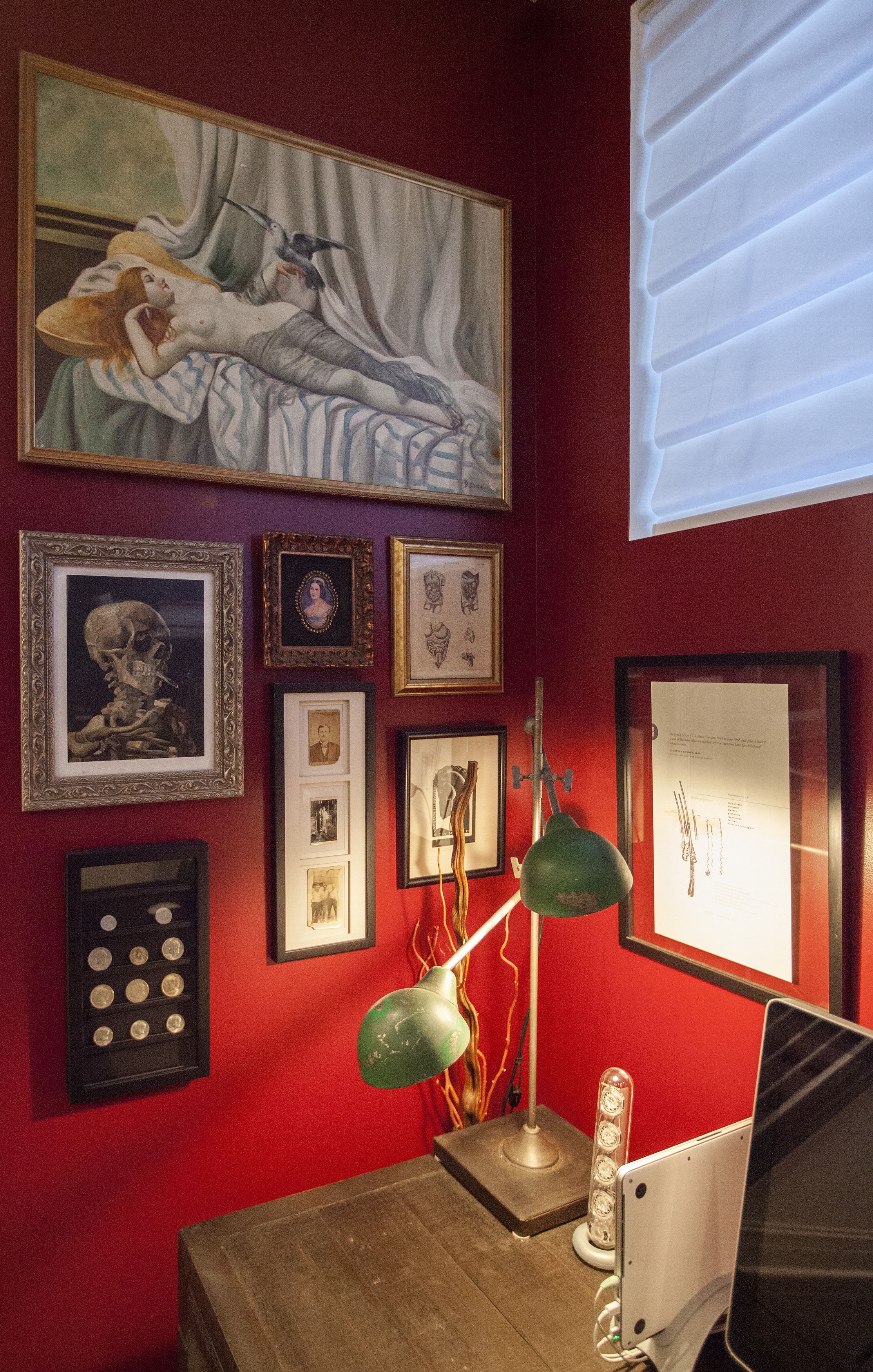 Chad: We own a 3,000-square-foot, four-bedroom, 3.5 bath new construction home in Bronzeville with an outdoor patio over a two-car garage at the rear.

Kristen: We closed on New Year’s Eve and moved in January 2nd, so we’ve only been here for nine months.

Where did you live before?

Chad: The West Loop. We loved the West Loop but we wanted more room and our own outdoor space. We were also interested in moving to an area that was considered "up and coming." Kristen and I had lived in the West Loop since 2003 so we got to see that neighborhood evolve from somewhat of a ghost town to the thriving neighborhood it is today. I still work in the West Loop so I get to see it most every day and I still can’t believe everything that’s happening there now.

How did you find this place?

Kristen: I had been looking for a while so I had lots of ideas. We had looked at houses in Humboldt Park and Rogers Park. We considered buying a gut rehab and we came very close to buying a house in Avondale but we went to see it when it was raining one day and got to see all the water rushing into the basement so we backed out of that. This place was brand new construction and much more house than we would have gotten in other neighborhoods.

What do you like best about your living in Bronzeville?

Chad: We really live in a sub-neighborhood of Bronzeville known as the GAP bounded by Martin Luther King, Jr. Drive to the East, the highway to the West and 31st and 35th streets. The neighborhood is very quiet but community members are very active and we’re hoping that new development is on the horizon. It’s unfortunate that we lost the Lucas Museum but we are excited about other new projects like the Obama Library, which won’t be too far from us.

Kristen: We’re on a beautiful street. It’s quiet. There are very cool buildings in the area, lots of old greystones and large, shady trees on every street. It’s very bikeable. I never biked in the West Loop but I made sure that we both got bikes when we moved here. I was a bit nervous riding at first but now I bike to work in the Loop using the Lakefront Trail.

Kristen: This was new construction so we were able to move in right away but there are certainly things we plan on changing. Chad is not a huge fan of the granite countertops and I wouldn’t have gone with dark wood floors if I’d picked them out myself. I have to sweep everyday or you can see Reggie’s white dog hair everywhere (we still really want to adopt another bulldog). At this point, most of our time and money has gone towards the basement which was just white drywall walls when we moved in. Chad had lots of ideas so I just let him go for it. 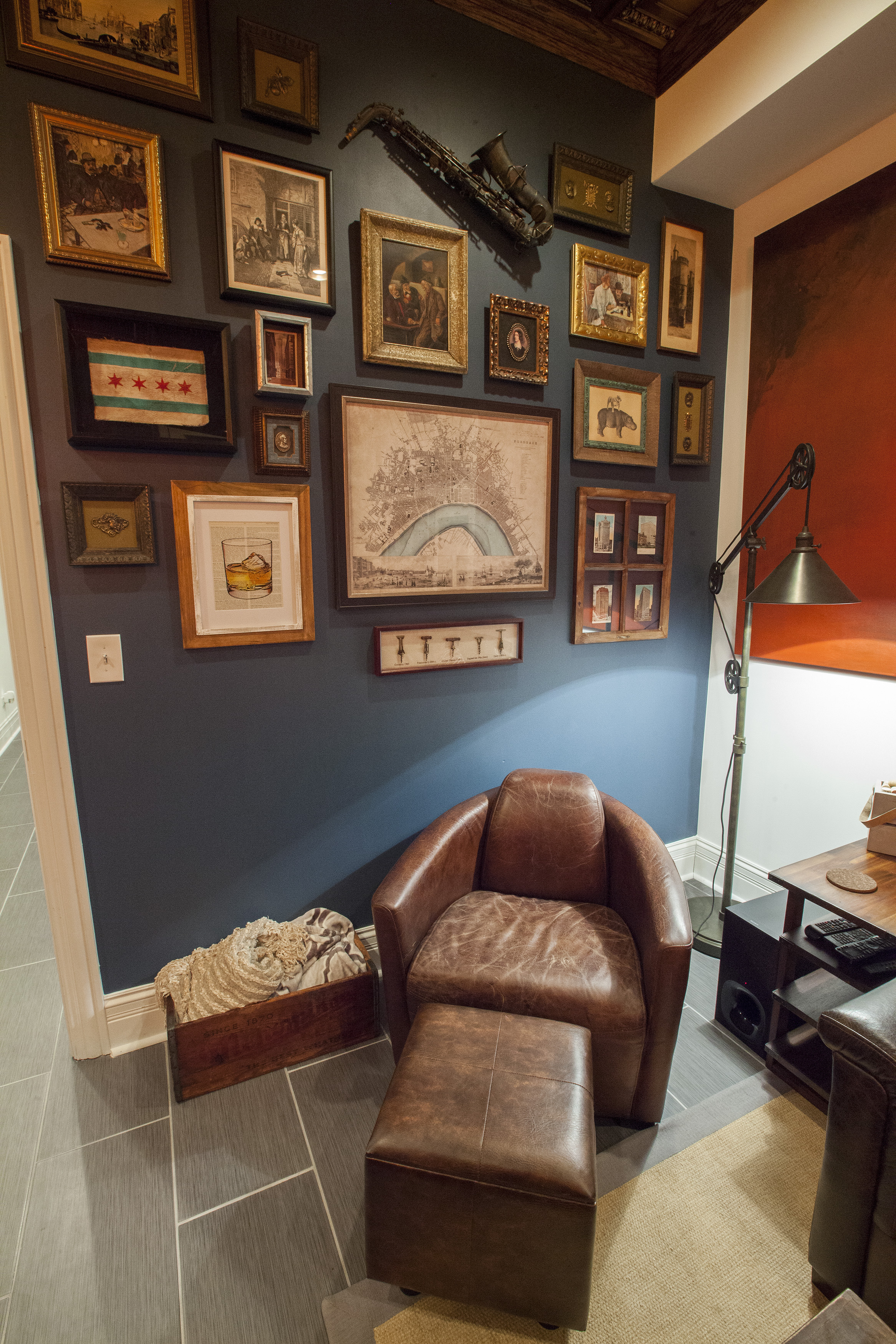 Chad can you tell us a bit about your vision for the basement then?

Chad: One of my favorite pieces in the house is the painting of the man behind the beautiful woman on the red wall in the basement. The painting is a family heirloom that hung above my grandparent’s bed for my entire life. The gaudy, Victorian frame is not something that I would have picked out (my personal style is a bit more modern) but when I received this painting after my grandfather’s passing, I had the idea of creating a huge saloon style wall with it as the centerpiece. I stuck the painting in a closet where it sat for years until we purchased this house and I was finally able to put the wall together.

Other things have been slowly purchased and gathered. Three of the large canvases painting had been astonishingly thrown away by someone in our old building. I found them in the dumpster and had them reframed in the same gaudy style and our red saloon is the result. It makes for a nice, relaxing atmosphere where we can sit and drink our bourbon.

And what about the collection of skulls in the basement?

Chad: I have always been a bit of a science geek. When I was attending design school I got really into anatomy and the life sciences. For a time, I was seriously contemplating transferring to UIC to study biomedical illustration but I decided to stick with visual communications. I never got over my fascination with science and anatomy though and my skull collection reflects that now.

My favorite skull is my articulated Beauchene skull. Beauchene was an early anatomist in the 1800s who created articulated skulls to be used for medical teaching. Some people find them a bit morbid but Kristen and I do not. They are really quite beautiful and a great piece of early scientific and medical innovation, a perfect combination of my fascination with science and my love of art.

Kristen: Yes, before we had any of the skulls I had taken a trip to Europe. In Amsterdam I picked up a souvenir at the Van Gogh Museum, a print of Skull of a Skeleton with Burning Cigarette. I thought it was a fitting gift as Chad had been longing for a real skull but I kept telling him I didn’t want one staring at us in our living room.

When I returned from my trip, I happily presented him with my "perfect souvenir" and he proceeds to tell me that while I was away he had actual purchased a real skull, the Beauchene skull. It was too funny. That one lived with us in our dining room at the loft and when I’d walk by it in the middle of the night on my way to the bathroom it would kind of creep me out … at first. Now I’ve become used to it and I’ve really grown to like them all. I’m glad we now have the perfect space for all of them to be displayed.

Will you be staying?

Chad: We’re here for the long run and we hope great things happen for this neighborhood and in the meantime we’ll be checking into Curbed for news and updates.