Penny and Bruce honored architect Frederick Schock’s original design, but have made the space their own

Penny Anderson always knew the distinctive orange brick building in Logan Square that her parents bought in 1966 was unique. The six-flat was built in 1911 by architect Frederick Schock and Penny’s family bought the building in 1966, when she was in high school. Before that, Penny says the building was a tony residence with a banquet hall and chauffeurs quarters.

So when Penny’s parents wanted to sell the building, she and her now-husband Bruce borrowed money from his parents to buy it. After that, the couple—fierce advocates of architectural preservation—embarked on a restoration of their apartment in the building, honoring Schock’s original design but making the space their own. (You can tour it yourself at Logan Square Preservation’s House and Garden Walk, happening Sept. 10.)

At first the couple moved into the basement—the old chauffeur’s apartments—and eventually settled into the building’s ground-floor apartment, where they live now. Penny, a retired schoolteacher, and Bruce, an accountant, rent out the rest of the apartments.

There is a lot to love about this apartment: it has a wide layout, art nouveau touches from the elaborate front door of the building to the decorative tile throughout, high, vaulted ceilings with intricate woodwork, and stained glass windows. But Penny’s father had done some renovating, including painting and removing some of the original woodwork. The building’s other apartments retained a lot of their original features, so the couple used those as a guide to restore their apartment. 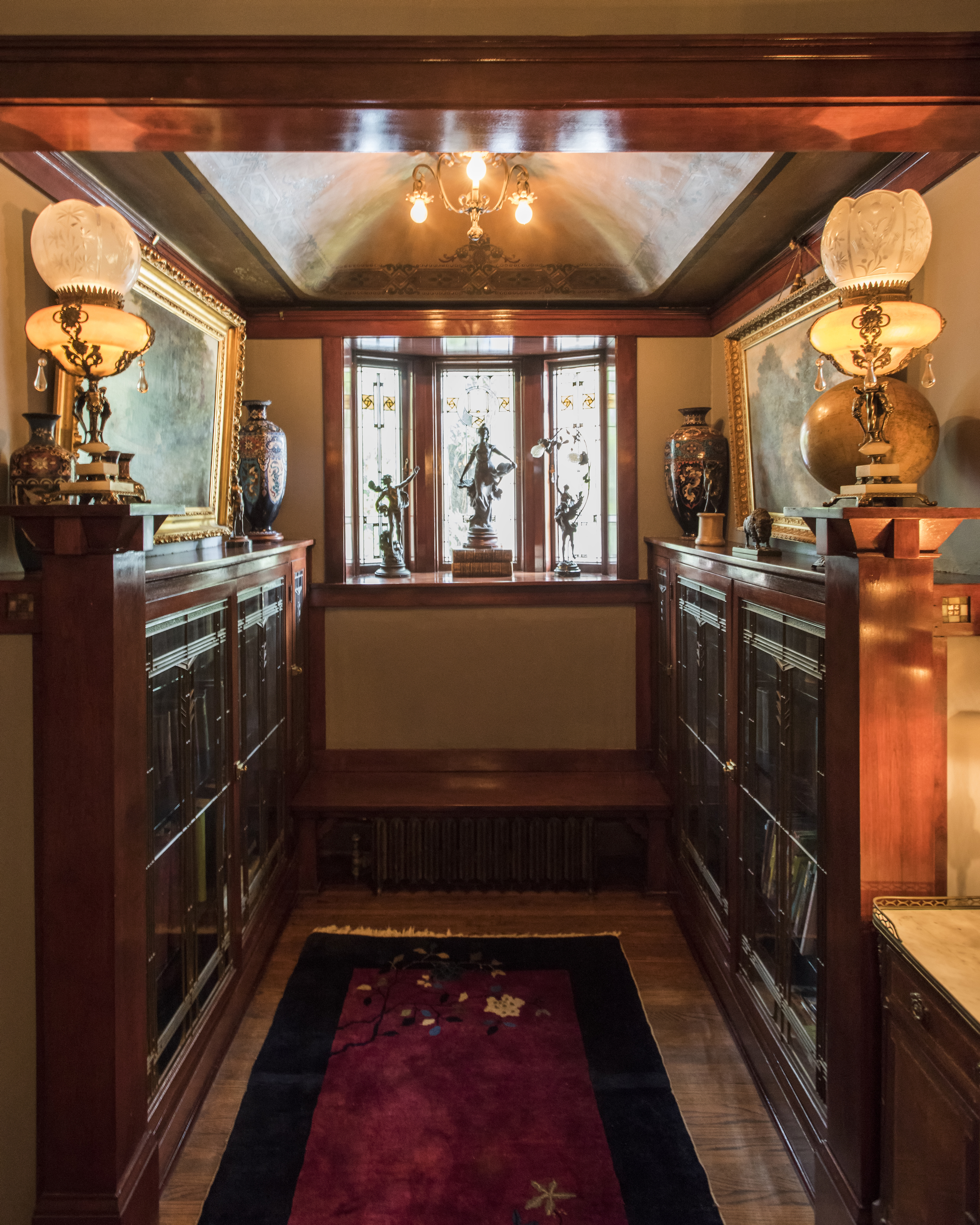 The biggest change they made was to add a modernized kitchen in the ‘80s, but they included a vaulted ceiling in that room to match the rest of the space. The result is a mix of the hallmarks of Prairie School interiors with dark colors and Asian-inspired decor that give the space some glamor and intrigue.

One of the couple’s favorite spots is the bathroom, which still has its original giant clawfoot tub, sink, and painted tile. There’s a big crack in the tile on the floor that Penny says she likes.

The space feels grand, due to its high ceilings, bay windows, and a wide layout with two cozy alcoves off the living room, one with a fireplace and another with a library.

When it comes to furniture and decor, most of the home is furnished with secondhand finds. There is classical art mixed with Asian-inspired items and wild touches, like ostrich feather and animal print upholstery. Penny is a collector who loves finding things; the onyx-colored credenza in the living room was a $44 thrift store find. Besides being practical—the couple furnished their home as a young couple—the couple is drawn to older pieces. 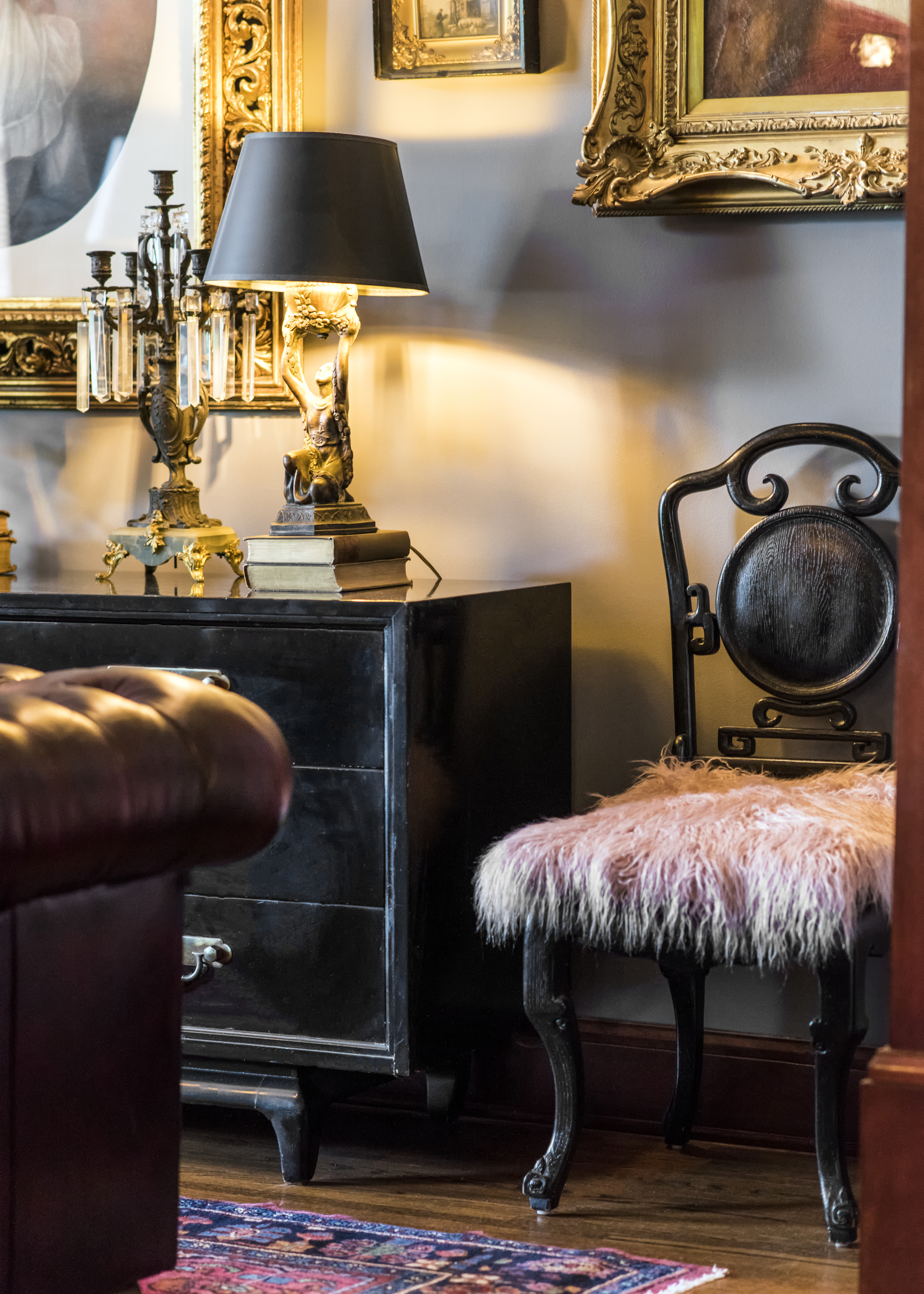 "When we got married in the ‘70s, we went to a house sale in Riverside for these people who got married in 1910, and you could tell they all collected their furniture and they didn’t change it in the next 60 years. So when we were young and furnishing the apartment, there was a lot of stuff available," Bruce says. "I think in the late ‘90s, 2000s, it all petered out. You go to house sales now, it’s just junk."

Penny chimes in: "The problem is, today, the young people want everything new and they buy IKEA stuff. They’re better off saving their money and buying an old piece of furniture."

The apartment is unusual because of the interesting decor, but also because it’s clear Penny and Bruce did a lot of work to preserve its character.

"If you would see this apartment empty, it’s still beautiful because there’s so much detail," Penny says. "If someone bought this building—and we’ve had many offers to condo it—they would gut this. All this would be gone. And it scares me. The young people have to say, ‘Look what you’re destroying here.’ There will be nothing left and everything will look the same. It’ll all be boxes."

"We do think that it’s unusual (to preserve an a apartment like this). You would never do this today. It’s too hard, too difficult," Bruce says. "We’re different from everyone else, and we like that."