A Couple Brings Light to a Former Lincoln Park Foreclosure

Two years have passed since Lucas and Nick first saw the potential of this forlorn and formerly beige foreclosure property in Lincoln Park. Since then, they’ve transformed this two bedroom, two bathroom duplex from a vacant property into a bright and welcoming home perfect for entertaining friends and family.

Lucas, an architectural professional, Nick, who works in media planning, and our two terriers, Emmi and Ollie.

Lucas: We own a 1,600-square-foot two bedroom, two bathroom duplex near the Armitage Brown Line stop in Lincoln Park. 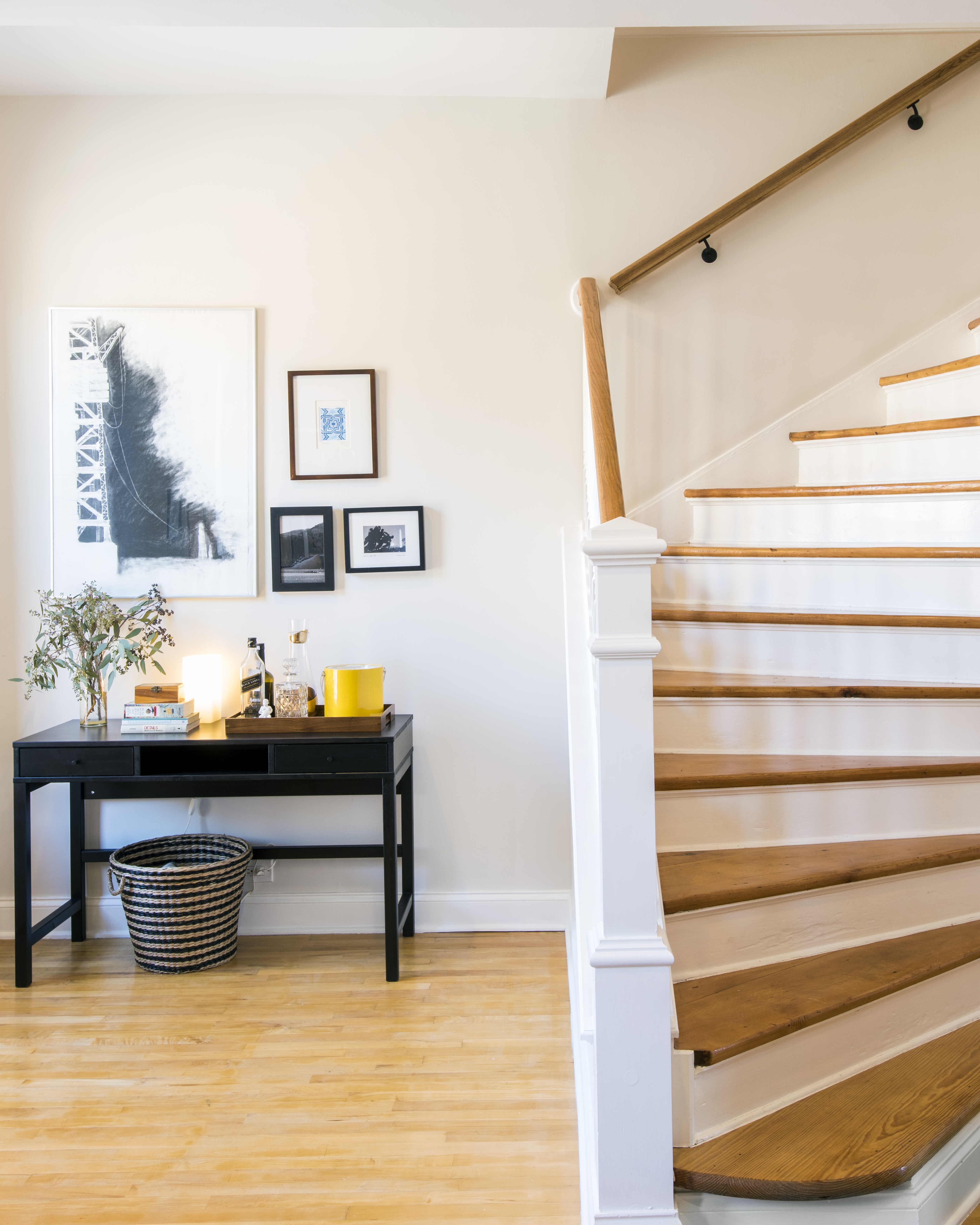 What do you like best about living in Lincoln Park?

Lucas: Lincoln Park is great. It is a beautiful and incredibly safe neighborhood with all of the amenities a young urban couple could ask for. We’re close to the lakefront, the Brown Line, and not far from the 606 trail. With two dogs and two runners in the family, we really do appreciate our proximity to so many great green spaces and trails, and we definitely take advantage of that.

So, how did you find this place?

Lucas: After I graduated from grad school, we began looking for an upgrade to our rental apartment. As we searched and compared costs, it became clear that investing in a home made a lot more financial sense than continuing to rent in the city. Unfortunately, we started looking at places in October so there really weren’t a lot of homes for sale. This was a vacant bank-owned foreclosure property that we had put on offer on early in our search with no response. Several months later, we were actually about to rescind our offer when they contacted us and accepted it.

Lucas: It was pretty obvious that the bank had put forth a minimal amount of effort in renovating the unit themselves. Everything was beige, think manila folder color. The toilets were of the large and bone-colored variety but had been paired with brand new white counter top vanities and the kitchen’s broken-tiled floor came complete with a mismatched, multi-colored and badly-finished grout. (We covered up that until just recently with an assortment of well placed rugs.) We even inherited two "windows" made of hand-cut plexiglass. The whole place needed a fair amount of work.

Nick: The biggest task we took on right off the bat was unifying the molding and trim work around the entire house and replacing a couple of the mismatched doors and the plexiglass windows. At first I wasn’t really convinced that trim would make such a noticeable difference but Lucas persuaded me and then he spent a lot of time meticulously matching moldings and corner pieces to bring it all together. Trim seems like a petty thing to put so much effort into up front but it ended up making a huge difference in the end.

Can you offer any advice to other renovators then?

Can you tell us a bit about your design style?

Nick: Lucas is more modern/contemporary while I’m a bit more classic and practical. He’s always thinking about aesthetics and I’m thinking about function. I’m always asking, "Is this actually comfortable?" or "Is this pillow going to scratch me?" but we come together on large purchases and I love what we’ve been able to do with this place.

Lucas: Yes, that pillow is scratchy but it looks great and the dog loves it. 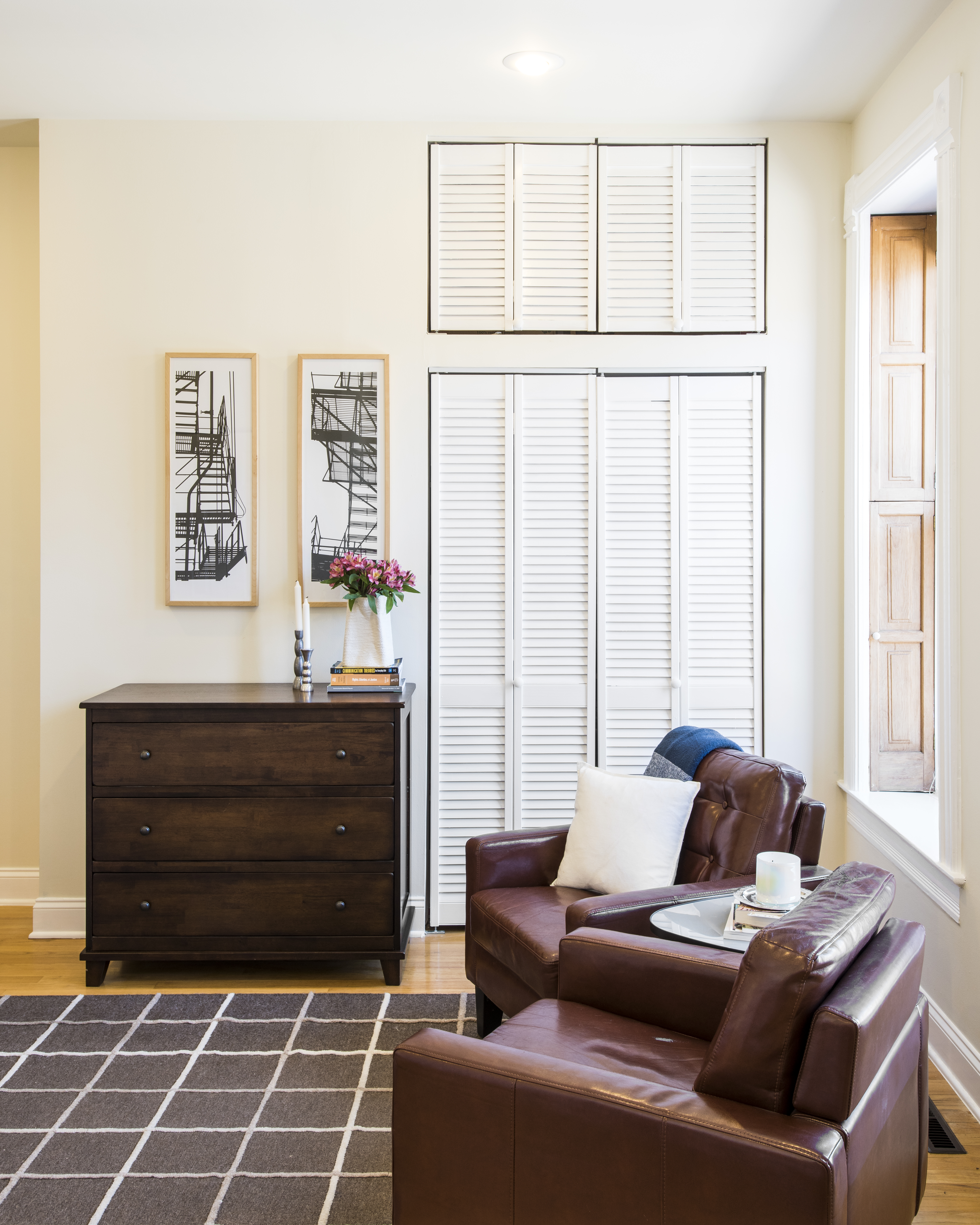 What thing do you like most about your place?

Lucas: The light. We get northern light through the front windows and a great southern sun on the porch. We rarely have to turn on any lights in the house because we get so much daylight in here. I also love the view, it’s pretty unique, the way that our building sits at the end of this street so you can see all the way up it.

Nick: I’d have to say the porch. Having a porch off both the kitchen and the master bedroom is such a luxury. When we entertain everyone is able to mingle in between the porch and the kitchen. In the summer, when we’re having parties, we all end up back there.

Lucas: I definitely made a mistake with this couch. It’s a great couch, I love it, but everyday I get home and I have to walk up the stairs and the first thing that I see is all of the dog hair under the couch. It drives me crazy. Whenever we have guests, we’re always making sure to clean under the couch and seriously, who does that?

Do you entertain in your home frequently then?

Nick: Yes! We love entertaining here. In November we had almost twenty-five people over for "Friendsgiving." We had three tables set up out in the living room using various tables and borrowed chairs and I cooked the turkey on the grill outside. I used to work in the service industry so I really lock down the kitchen whenever we have guests.

Lucas: Yes, Nick cooks while I entertain but we did hire extra help just for the "Friendsgiving" occasion and it was probably one of the best decisions we’ve ever made. Colin, the hired hand, was just hanging out in the kitchen the whole time, chopping vegetables and filling everyone’s water glasses, doing whatever needed to be done. At the end of the night he just left a giant stack of clean dishes in the kitchen. I was so thankful for him, there were many toasts in Colin’s name that night.

So it sounds like you’ve made some good memories, will you be staying?

Lucas: Actually no. We have always thought of this place as more of an investment move than a forever home and we’re already looking ahead to a new and larger project. We're very glad that Curbed stopped by though. We love entertaining and sharing what we’ve created with everyone. Hopefully you can come by our next place in a couple of years!