The proposal includes 500 hotel rooms and 85,000 square feet of office space in a new 31-story tower

The first public meeting for River North's newest hotel proposal in a new 31-story, 395-foot mixed-use tower to be located at 330 North Clark Street took place last night at the River Roast restaurant within the Reid-Murdoch Center. The historic warehouse building dating to 1914 has since been restored and converted into office and restaurant space by Friedman Properties, which is also the developer behind the proposed hotel. Designed by George C. Nimmons of the firm of Nimmons & Fellows, the Reid-Murdoch Center is an official City of Chicago Landmark. The building, which stretches from LaSalle to Clark Streets, features a riverfront facade blending the Chicago School architecture style with Arts and Crafts detailing. Meanwhile the rear of the building has a notch in the northeast corner of the property, where a surface parking lot presently fronts onto Clark Street and this open 80 foot wide and 200 foot long site would be the location of the new tower. 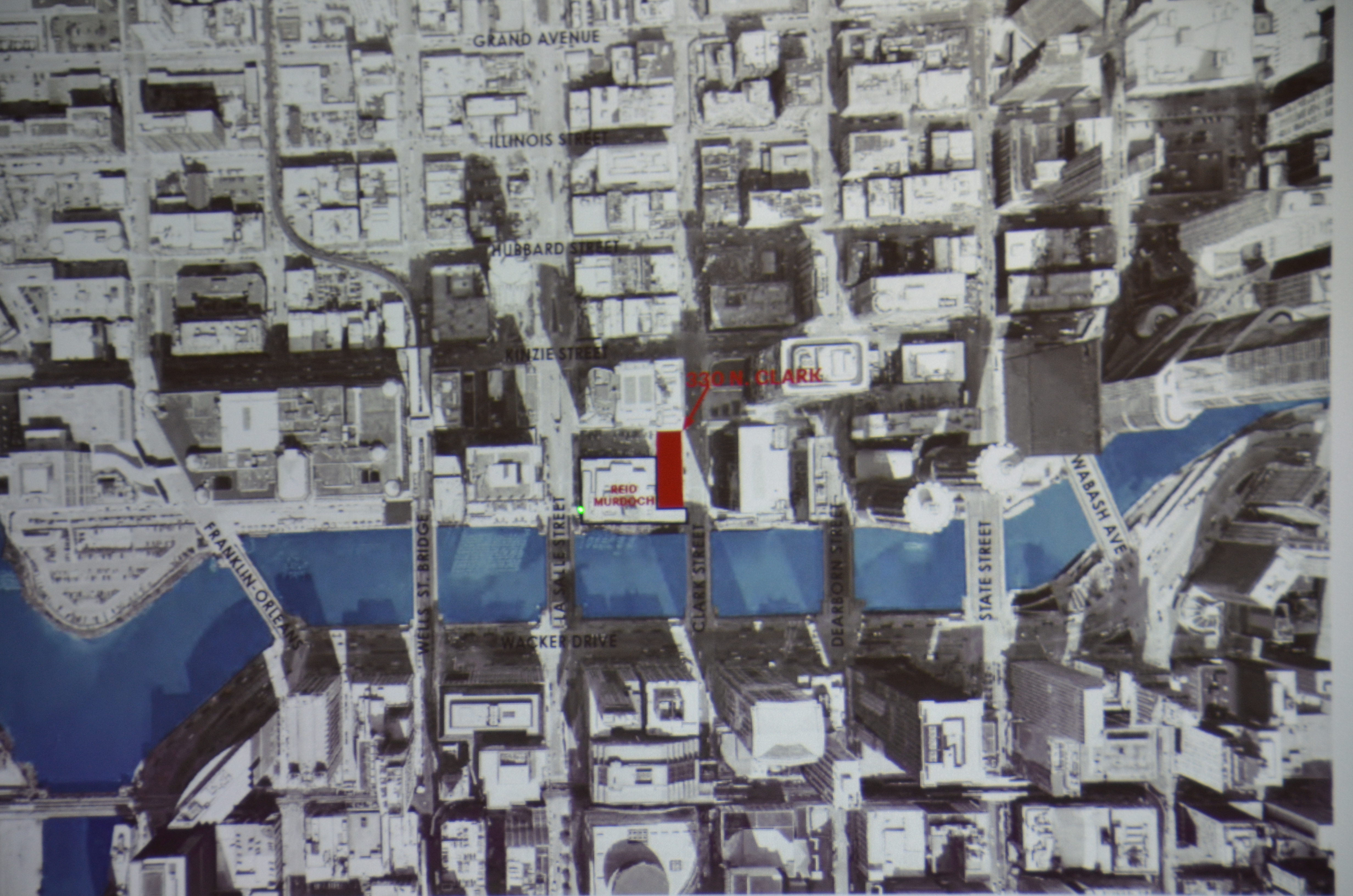 The parking lot currently serves as a entrance for a rug store and a furniture shop, with the rug store featuring a modern entrance pavilion. This pavilion would be demolished while the remainder of Reid-Murdoch's Clark Street facade would be untouched.

Due to landmark designation, all of the walls at the east, south and west edges of the structure must remain as is, however the less decorative walls surrounding the parking lot do not have any landmark protections.

The new tower would be constructed up to the existing brick walls and would be linked to the office spaces on floors 2-7, expanding them outward for a total of 85,000 additional square feet while creating a podium base for the hotel floors above. The existing non-historic brick walls would have openings cut into them while some portions of the old walls would remain within the new interior spaces. The first floor of the new tower along Clark Street would then have its entrance for the hotel lobby as well as a bar and restaurant space creating an active and lively street frontage.

To the north of the tower footprint, a portion of Lower Carroll Avenue would be decked over to create a porte-cochère allowing for vehicular drop offs to occur away from Clark Street. The property line of the Reid-Murdoch building extends 20 feet into the present alignment of Carroll Avenue and is presently used as on-street parking. This area would then be covered with a new elevated driveway and sidewalk along the backside of the old building. This would create a one-way access route for vehicles circulating to and from the hotel’s main entrance. The vehicles would enter from Clark Street on the east and exit the driveway via LaSalle Street on the west, with valet services moving vehicles onward to the Friedman owned Greenway Self Park garage located at Dearborn and Kinzie Streets, which has ample capacity to take on more parked cars.

While concerns of traffic were presented among the crowd in attendance, it was stressed that downtown hotels generally have only 15 percent of patrons arriving in personal vehicles, with the remaining 85 percent arriving by transit and taxi services which are already on the local streets. The developer-commissioned traffic study performed by KLOA found some signal improvements could be made to the intersection of Clark and Kinzie through an additional left turn arrow and adjusted timing which would facilitate better traffic flow. Additionally, the site has close proximity to direct airport access of both O'Hare and Midway with the Chicago Transit Authority's Clark/Lake station a little more than two blocks away, meaning many future hotel guests as well as building employees could easily walk to the new tower after stepping off the train.

The lower floors of the tower holding office spaces would have facade treatments relating to the architecture of Reid-Murdoch, but expressed through modern design. As the historic facade along Clark Street ends, a five foot recession in the facade is set back from the property line for the full height of the tower. This "transition piece" is 20 feet wide along Clark Street and would present a return (a masonry facade turning a corner) of the historic brick exterior and intentionally contrasting with the glass expression of the tower's southern edge.

A 'C' shaped projection would run along the second floor slab, turn vertical and then run along the eighth floor slab, lining up with the cornice lines of Reid-Murdoch as well as the terra-cotta clad building to the north. This "expressed frame" would then be reinforced by a "curtain wall reveal" above which relates to the traditional roof line of Reid-Murdoch.

Facade contextualism then goes a step further with the window patterning of the base, starting with the proportioning of the window openings on a 1:1.25 ratio of width to height, matching that of Ried-Murdoch while texturing the facade to relate to the series of four story and two story vertical pilasters of the historic facade.

Hotel reception would occur at the eighth floor, which aligns with the roof of the Reid-Murdoch Building where a seven year old, single-story addition housing the headquarters offices of appliance maker Whirlpool is located. The setback, which largely unseen from street level as per landmark restrictions, allows for the open roof space to be covered with an outdoor terrace which would be greatly enhanced for shared use by hotel patrons. This sky lobby as planned would also include a second restaurant and bar.

The next two floors will include 14,000-square-feet of meeting rooms followed by a fitness center and spa on floor 11. The next block of floors will include 19 stories of guest rooms for a total of 500 keys. The building is then topped by a rooftop terrace. The sloped roof would top out at 395 feet in height towards the northern end of the tower which cantilevers over the new proposed driveway above Carroll Avenue. The exterior of the new building is to be clad in a textured facade of transparent and silver tinted glass.

The new tower will utilize the existing two-level street network adjacent to the site and would feature two basement floors where back of house and loading dock functions would be located.

The property is currently within an older planned development (PD) which would be dissolved before a new PD would be created to govern the development of the tower. The underlying zoning of the PD today is DX-16, a downtown mixed-use zoning with a floor area ratio (FAR) of 16. The development team however is proposing a total FAR of 12, and no bonuses are being sought as the plan is well within the density parameters of its prominent location. If approvals are swift and construction begins shortly after, the new tower could be completed in approximately 24-28 months. At this present time, a specific hotel brand has not yet been selected.