An Uptown Couple Keep a Co-op in the Family

Kevin and Ryan were initially looking to buy a single family home where they could find some peace and quiet, but when a friend’s Uptown condo was put on the market, they jumped at the chance to purchase the 12th floor unit. One year and a few coats of paint later, the first-time homeowners are finally feeling settled in and ready to enjoy a Chicago summer overlooking the lake.

Kevin, Ryan and our cat, Koda.

We own an 1,100 square-foot one-bedroom condo on the 12th floor of the historic Aquitania building in Uptown.

We moved in in January of last year, so we’ve been here a little over a year now and we’re finally feeling settled in.

Can you tell us anything about the building’s history?

The building itself is a nationally registered historical landmark designed by the New York architects Ralph Harris and Byron Jillson. It was built in 1923 by George K. Spoor, a co-founder of one Chicago’s early silent film studios, and originally provided housing for actors and industry employees brought to Chicago by Uptown’s booming film scene. It’s also named after a ship! A famous luxury ocean liner called the RMS Aquitania. 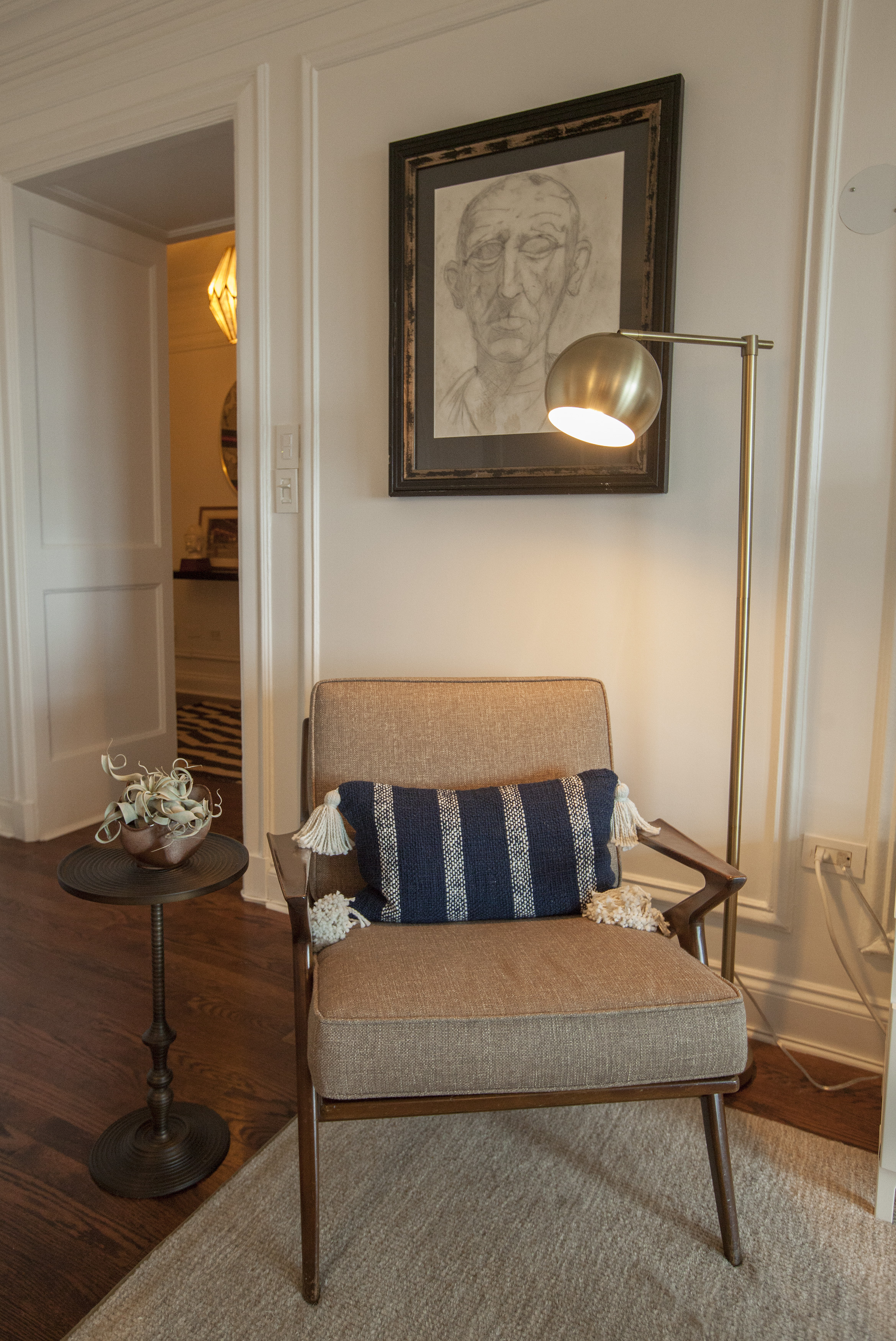 So at some point the building was turned into a co-op?

We know that the building flooded a few years after it was built because it used to sit right on the lake. We’ve also heard that it caught on fire once or twice as well. Unfortunately, most of the Chicago-based film studios moved to Hollywood by the 1920s, so in the 1940s the building was turned into a co-op and it hasn’t changed much since then. The units are split up into two tiers, a North tier and a South tier, with three units in each tier on every floor. It’s a nice layout with large units that get a lot of light and great views of the lake and the city.

How did you find this place then?

We were living in an apartment building in Ravenswood but looking to buy a single family home out in the Berwyn area. We wanted a yard and were thinking about getting a dog. We had all these plans but we were also getting incredibly frustrated with the whole house-hunting process.

We had pretty much given up until, one night, we were out at dinner and Ryan’s close friends shared a Facebook post about their recently listed unit in Uptown. I had never been to the place before but the owners had actually given Ryan a key many years ago and let him crash there whenever he liked. So there we were, each two margaritas deep, texting them, "We’re going to buy your place." Obviously we did, it’s like we’re keeping it in the family.

The unit was in really good shape when we bought it, so we really didn’t have to make any drastic changes. Painting was our biggest investment and we made a great decision having someone come in and paint for us. It would have been a nightmare painting all of this molding ourselves.

We went with a classic white for living rooms and entry and a beautiful gray that I had just used on a project at work (Kevin works at an interior design firm in River North) for the dining room. Our old apartment was rather dark, so we really wanted to take advantage all of the light that this apartment gets.

What future design plans do you have?

We still need to repaint the kitchen and we’d like to add a pantry in there as well. Our biggest project will probably be turning our bathroom into more of a master bath and converting the coat closet into a powder room. It will be nice for our guests to be able to use the bathroom without walking through our bedroom. 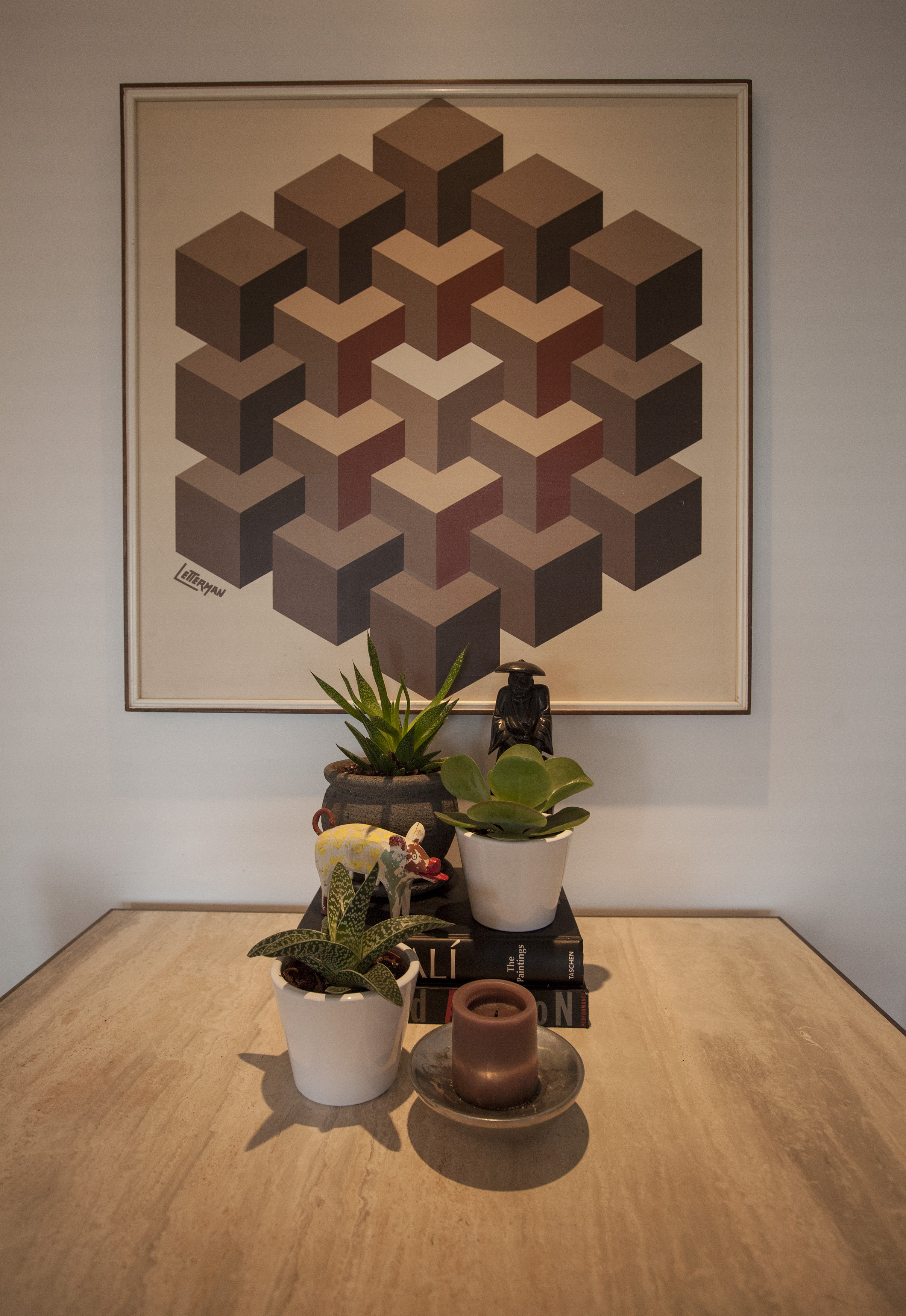 Have you had to face any major challenges as first time homeowners?

Yes! Very recently actually. We were up in Evanston for the afternoon and we had just gotten our tax returns filed so we were discussing what to do with our money once we got it. When we arrived home we heard this horrible humming noise coming from the kitchen and found that our refrigerator had broken and flooded the floor and hallways with water. So there went our return. Luckily, no real damage was done and Ryan’s parents helped us find a replacement fridge in a matter of days, but it was our first big unexpected homeowner expense.

What’s your favorite thing about your place?

The light and the quiet. Our old place was super dark and it had paper thin walls so we never slept well and we could hear the other tenants constantly. This place is like a tomb in comparison. It’s so quiet that we sometimes forget we have neighbors above and below us at all.

We love the diversity of this neighborhood and, like our place, it is also very quiet and peaceful. Unfortunately, since we’re so close to the park and the beach, finding parking is a nightmare. Parking in Chicago in the winter is awful everywhere but, in our location, finding parking in the summer is almost worse because people drive to the park or beach and park on our street. After six months of searching for parking on a daily basis, Ryan gave in and bought a parking spot in a building next door. It’s definitely worth it.

So you’ll be staying?

We love this place even though it’s not what we were initially looking and we’ve really had a great experience here thus far so I think we’re planning on keeping it in the family forever!