Shortly after the Chicago Cubs clinched the World Series title last week, the city announced a parade and rally that would celebrate the historic win. Street photographer and Florida resident Robin Flynn immediately booked a flight to Chicago for the day to capture the event. According to city numbers, five million people attended the parade and rally, which started at Wrigley Field and ended in Grant Park. The parade brought millions of Chicagoans together and made history as one of the largest peaceful gatherings of people in one place.

I was taking the 'L' downtown Friday morning like thousands of others to get a glimpse of the World Series champions as they rolled down Michigan Avenue when I ran into Robin Flynn. The train car was absolutely jam-packed, but we all huddled in so that everyone could get downtown and have a chance to celebrate the historic event. I had a copy of Thursday's Chicago Tribune with me for the rally, and at one point someone asked me to hold it up so that they could take a photo. Robin introduced herself and asked me which stop I was getting off at. I found out that she had just come from O'Hare and was looking to get downtown to document the parade.

A freelance writer and amateur street photographer, Robin said that she booked a trip from Florida as soon as the city announced the parade. The interaction proved not only how significant the Cubs' World Series win was to Chicagoans, but how it galvanized the nation and brought many not only to follow the games, but to actually come to Chicago to witness the exuberant energy.

But beyond the huddled masses and enormous crowds that lined Michigan Avenue and Randolph Street are individuals who came out to be a part of the event. Families and friends came out to share the experience together—an experience that folks will remember for the rest of their lives. Here are some of Robin's photos from her one-day trip to Chicago for the Cubs' historic World Series parade.

What moved you to book a last minute flight to Chicago?

My sister has lived in Chicago for more than 25 years, and she’s often talked about how exciting it is to see the city come together and celebrate after a big win. From the start of this year’s World Series, I watched the friendly rivalry taking place between Chicago and Cleveland fans, from their art museums to their radio stations and newspapers. I knew this would be a celebration unlike any other the city had seen before, and I didn't want to miss seeing it firsthand.

As someone from out of state, what did the Chicago Cubs' World Series win mean to you?

I grew up watching my grandmother and my uncle support the Cubs because they could always count on catching their games on WGN. When my sister moved to Chicago, that support grew even stronger. And now as a frequent visitor to Chicago, I try to go with my sister and our friends to at least one game each year. I’ve met some avid Cubs fans over the years, and their team spirit is infectious.

What did you expect to see when you got into Chicago?

All I really knew to expect were throngs of people and lots and lots of revelry! Beyond that, I wasn’t sure what I would find. But I’ve seen enough of the good-natured spirit of the city over the years to know that the celebration would certainly be fun and memorable.

Have you ever experienced anything else like the parade and rally in Chicago last week?

From my experience, the only thing that would come close would be the Bastille Day celebrations in Paris. But given that the parade and rally were so specific to the city and the fans, the mood of the event seemed even more heartfelt. 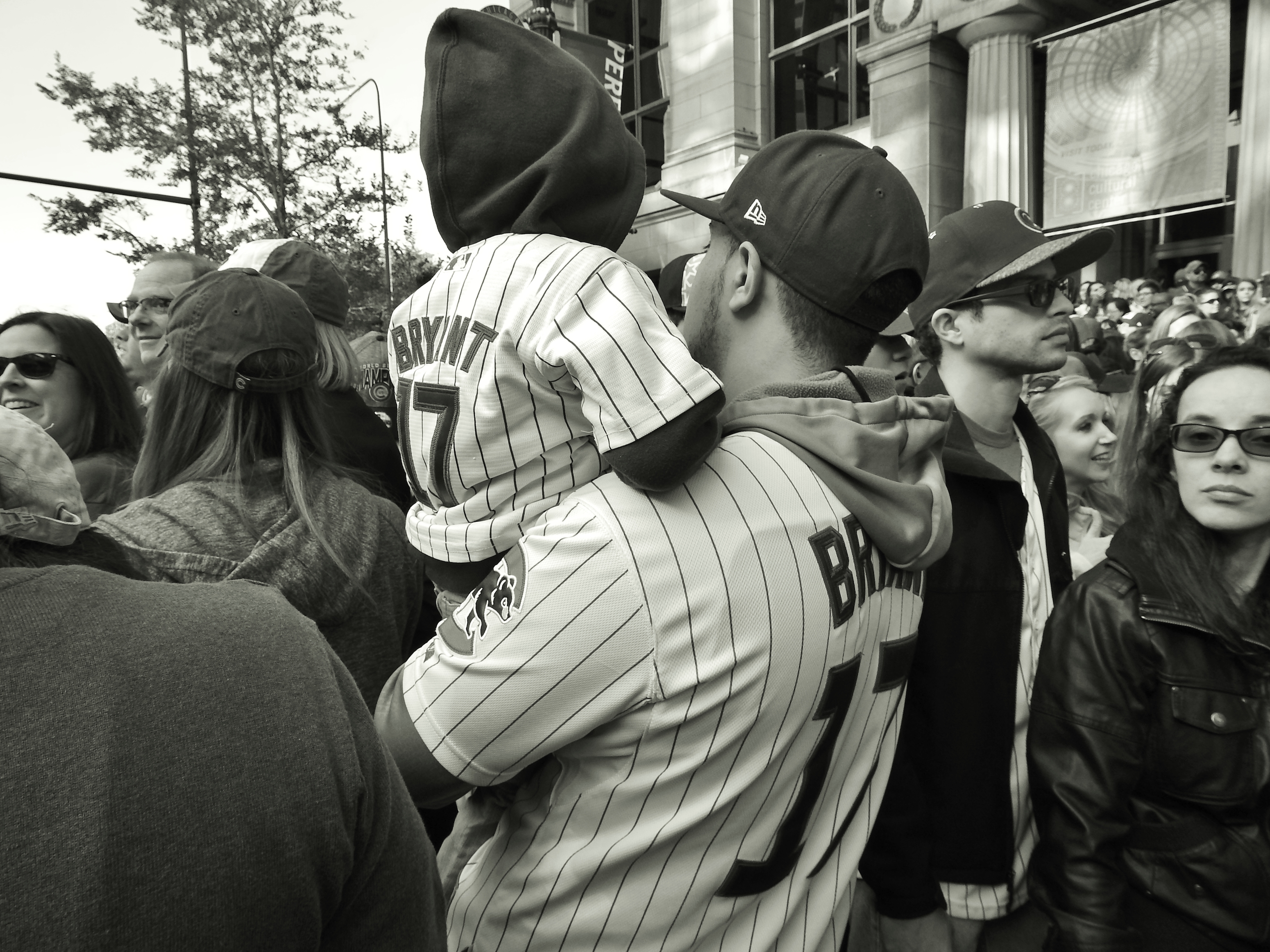 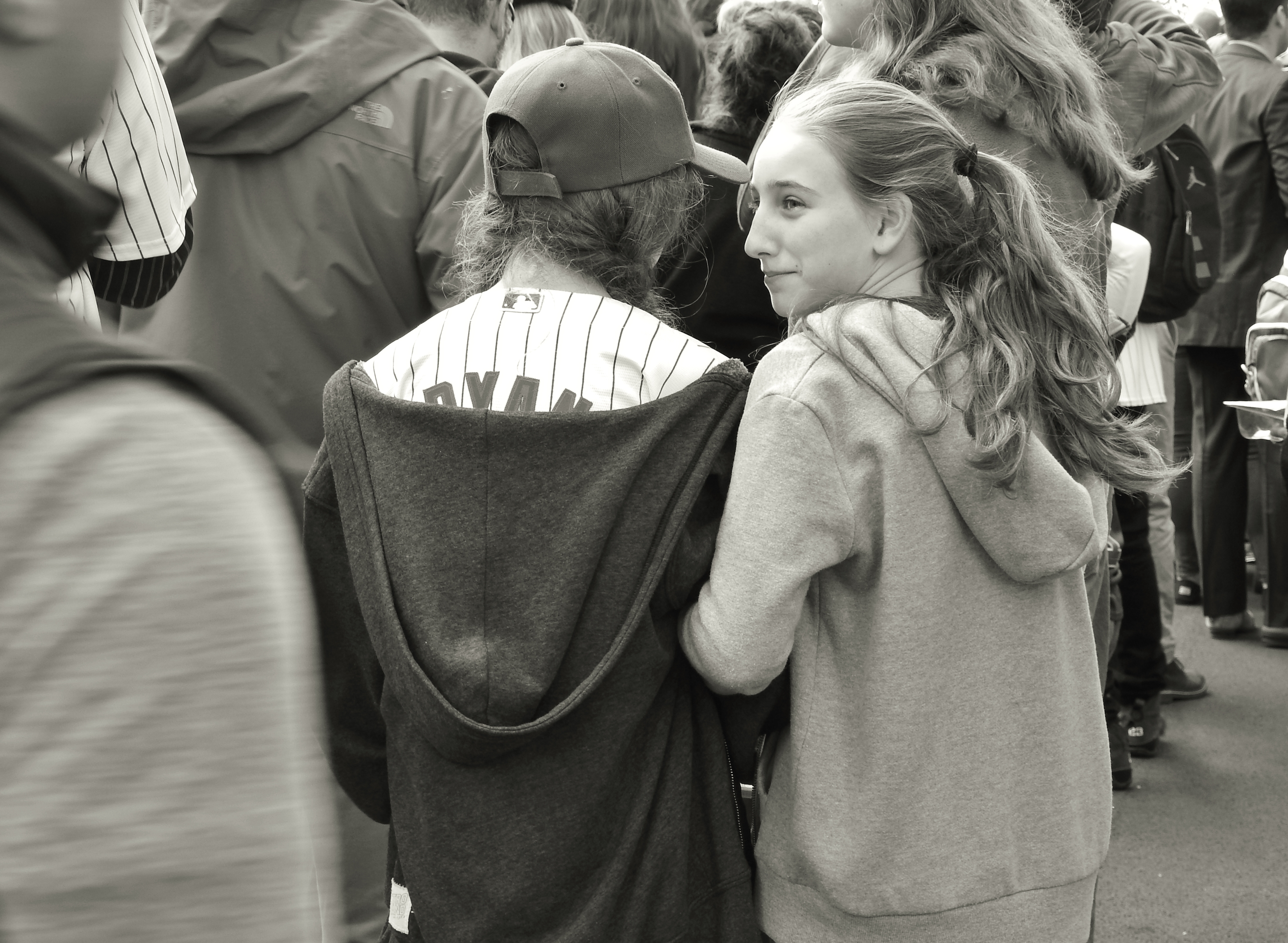 What were some of the more memorable things you saw?

I saw families, friends, and individuals from a wide range of ethnic and social backgrounds all celebrating together. There’s no one stereotypical Cubs fan. It was moving to hear people comparing stories of how they got to be Cubs fans and what baseball meant to them. One woman mentioned to me she had found herself crying spontaneous, happy tears ever since the Game 7 win.

You were in town for less than 24 hours, would you say that you were able to capture everything you hoped to see?

When I started out, I knew I wouldn’t be able to see everything, so I had to keep the mindset of simply capturing what was going on around me and let that just tell the story of my experience in Chicago that day.

You captured a lot of images of families celebrating the World Series win together. What was special about seeing this?

An event like this makes it obvious how much emphasis people place on finding different ways to connect and celebrate and make lifelong memories together.

How can Uptown hold on to its affordability?

What Chicago renters need to know during the coronavirus pandemic

View all stories in News
Chicago